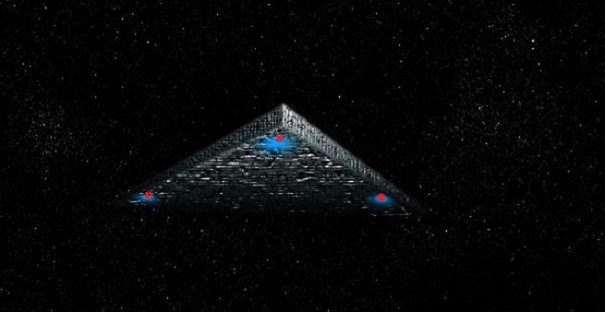 I was taking out some recycling.  I saw a triple red light something far away up in the sky to the east. Over 20 seconds it grew huge. The size of a large house maybe by the time it was directly overhead. It looked like it was made of poured concrete, but made of gunmetal. It was an isosceles triangle wedge. Very thick. Very sharp corners. The 3 red lights on the corners were large but didnt blink. There was a large white light in the center, in a depressed circular pit-like region. It was like a search-light; very bright.  It blinked like an aircraft light would. There were no windows. There were no aircraft like parts. There were no landing gears or anything like that. It was like a huge metal wedge cut out of a mountain or a pyramid or something. It was flying a natural aircraft arc. No crazy ufo flying. Right when it was directly overhead, it seemed to change shape for an instant into a giant borg cube looking thing. I know it didn’t actually change shape. It felt like my mind was trying to make sense of something it couldn’t properly interpret. Now I don’t actually believe in UFOs! I think they are actually precognitive sentient phenomenon but this sucker looked like a part of a mountain was ripped out and that it flew over my house to mess with my theory! (possibly projection on my part). Right when it flew overhead, it was suddenly gone. I don’t know if it flew out of sight or it just disappeared. I’m ex military; ex nuclear engine room supervisor. Not rattled easily.  NOTE: The above image is a rendering.

KENS NOTE:  We have been getting many UFO sightings that have the lights of our commercial aircraft.  I feel these alien craft are trying to hide in plain sight and trying to copy our lighting system for aircraft.  I witnessed one last month with two green lights on one side and two red lights on the other.  They were rectangular lights and I have not seen this type of lighting on our commercial or military craft.