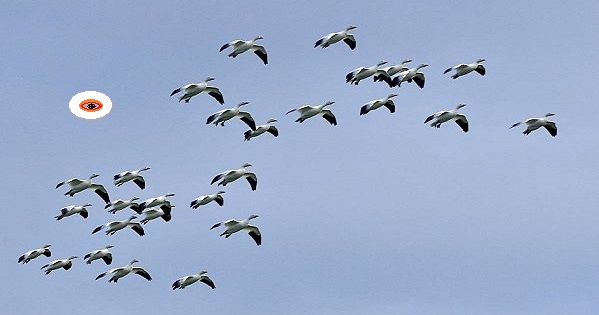 ALIEN SPHERE AND FLOCK OF GEESE VANISH OVER CALIFORNIA

DECEMBER 5, 2013    ….    SIMI VALLEY CALIFORNIA
There was a flock of geese flying east in a typical “V” formation. A white object was approaching the formation from the west and below at an angle of approximately 45°. At first I thought it might be another goose joining the formation, but I’ve never seen a “white goose” so I thought that it could be a seagull.  As I tried to get a better look at it, I couldn’t distinguish any appendages such as wings or head, it appeared to be spherical in shape with what looked like a mirror sort of reflection flashing randomly, nothing like a wing with regular features or motion. Its size appeared to be similar to a goose or seagull.  As the object started to get close to the geese, their formation became erratic and the typical “V” became chaotic while it appeared that they were trying to regroup but were unable to. The white object reached a point close to the geese – with the direction of the flock being east and referring to the direction of flight as 12:00, the white object stayed at approximately an 8:00 position close to the group, but not inside, now moving as if it were part of the group.  I was trying to adjust my vision to see the white object as a bird considering that my eyes were, “playing tricks” with my perception, but I just couldn’t see anything but a sphere. After a minute or so, the entire flock including the white sphere “disappeared”.  There were no obstructions or clouds to block my vision, but I moved around to different positions to try to get a different perspective because at this point I wasn’t really considering something unusual happening. What really held my attention was the thought that I was seeing some sort of albino goose.  It took a few minutes after the flock of geese disappeared that it struck me that something more unusual was going on.  There were no unusual sounds or other objects, no aircraft of any type were in the area from my perspective. The sky was clear with high visibility. Only the geese and the white object were seen. The approximate location was: 34° 17’ 39” N, 118° 41’ 42” W (from Google Earth). Unknown Altitude.  I really don’t want to jump to any conclusions. I’m sure that there may be an explanation that just hasn’t occurred to me.  Thank you for your time and interest. If there is a simple (or any) explanation, I would be very appreciative to find out what it is.  I was looking from the South facing North and slightly East. They were flying East. I was the only (1) witness. I’m happy to answer any more questions and very much appreciate your work.  NOTE:  The above image is a rendering.
KEN PFEIFER WORLD UFO PHOTOS AND NEWS
WWW.WORLDUFOPHOTOSANDNEWS.ORG
WWW.WORLDUFOPHOTOS.ORG
THANKS TO WWW.NUFORC.ORG