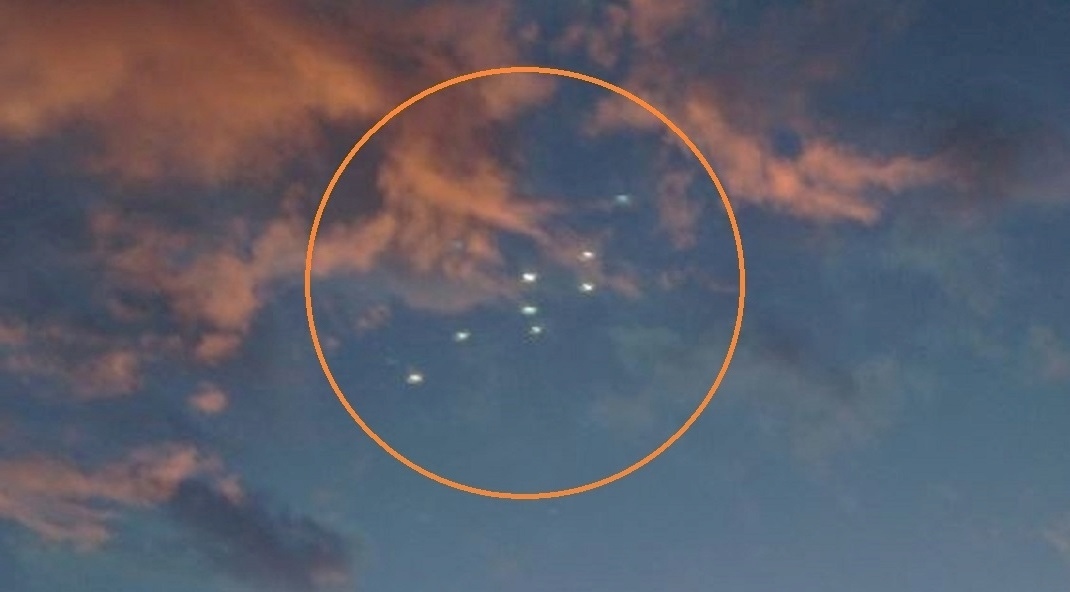 I’d only been out for a minute when I saw the lights. At first, I thought nothing much of them because, living almost due south of Harrisburg and north of Baltimore & Washington, were on the edge of a pretty busy air corridor and its not uncommon to see air-liners nearing or, at their cruising altitudes; long vapor-trails crossing the sky behind them. Sometimes, like “this one”, they’re still rather low in the sky (for some reason), so I wasn’t all that impressed – at first. Something drew my eyes back to these lights so I pointed the flashlight at the lights and “blinked” it a few times, as Id heard (or read) somewhere that “real UFOs” sometimes “respond” in some way or manner. The lights didn’t seem to change or acknowledge my light in any discernible way, so, taking my eyes from them for a moment, my gaze returned to the lights.  We’d only moved a short distance from where I’d originally noticed the lights, but it struck me immediately that they’d either stopped – or, slowed significantly – as they appeared to be in the same spot (or, even back a little!) as when wed begun moving to where I now stood, watching. As an artist, I understand angles and perspective, very well, and am certain what Im reporting is true. Even if the lights hadn’t stopped or slowed, they would have still appeared to have moved farther south, because I had moved parallel/opposite their direction of travel. They didn’t. Thinking back on it (again: this happened only a matter of minutes ago), when I first looked back at them, they truly appeared to have become stationary for a moment – or, even to have reversed their course somewhat. Then, when I began looking closely again, though, they continued at their previous… almost leisurely speed – traveling along their original flight-path. And, although I could see them clearly (four, bright, yellowish/almost amber-colored lights with a bright-white strobe in the middle), and they were really quite low (not seeming to climb at all, throughout the sighting), plus, the fact that they “must” have been relatively close… it struck me that there was still_no_sound_whatsoever_. None. And I’d “cupped” my ears at both spots, too: straining to hear. Yet, no sound emanated from the lights – nor, anything else in their general direction. Only on our way back inside did a small airplanes sound become audible and I spotted it easily, in the western sky – far away, much higher up and in the opposite direction of the lights Im describing. Another thing which strikes me as odd is that the four, yellowish lights did not change their position, relative to me. In other words, had they been, say, on the nose, tail and wing-tips, their positions and appearance in relation to me (and the strobe) would have changed as they passed from my left to my right. They did not. They remained perfectly spaced and the strobe remained in the center – giving them a rather bizarre and unnatural appearance as the lights traveled in a straight line, not an arc or curving path. I have no explanation.

Now, Im assuming they were low in the sky (they were about 40 degrees above the horizon), but I must concede that – given how clear the morning was and the fact the lights did not pass in front of/behind any clouds – it is entirely possible they were much higher and farther from me than I thought them to be. If thats true, however, the lights must have been enormous! Thus, I believe my description of the size, altitude & distance from me to be accurate: 100-300 in length (although, maybe longer as, with my arm extended, they spanned half the width of my thumb). I estimate their altitude to be around 3,000 and feel I viewed from about a miles distance (at their closest). As they took more than three or four minutes to cross my limited field of view, Id estimate their speed at around 200 mph, or so. They sure werent going very fast and considering there is no airport within 30 miles (or more) in that direction, if they “belonged” to a large airplane, they should have accelerated and climbed – which they didnt – and again, I stress that there was no sound, at all. Heck! If they belonged to a small airplane, theyd have been even closer to me – so, I certainly would have heard something! Lastly, it occurred to me they might be a helicopter, but the relationship of the lights to each-other seem (to me) to discount that. Although the (supposed) altitude and relatively low speed might correspond to some helicopters flight characteristics, the color of the lights & their exactly symmetrical positions – and utter lack of sound (few helicopters can go that fast and theyd certainly have been audible) – eliminate the possibility of the lights representing a helicopter. I just dont buy it and am at a loss to explain the lights by assigning them to any aircraft I know of (and I know of more than a few).  I’m sorry this wasn’t particularly exciting, but I wanted to be sure to describe everything as it happened because it was pretty peculiar – at least, to me! Also, I should mention that my dogs showed no sign of distress or excitement. They were as playful – and obstinate – as ever! As ever, ignorance is bliss, I guess!  NOTE: The above photo was taken my a witness on 11-19-13 in the Picayune Mississippi area.