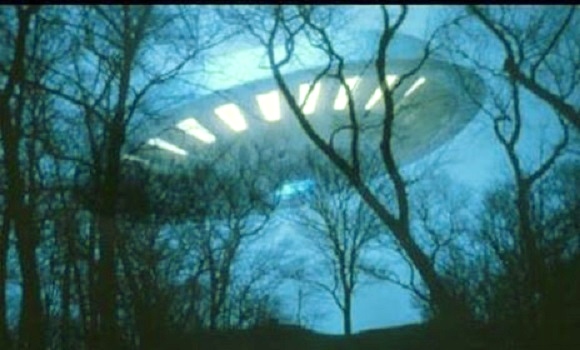 Standing on back porch in Porter Corners NY, a suburb of Saratoga Springs and noticed bright object in sky larger and brighter than anything else. Object abruptly made fish hook turn heading in opposite direction towards moon. Screamed for my friend Ben as I immediately knew this object was under intelligent control and not of current technology. Object went a short distance and stopped dead and hovered for a few seconds and then streaked back the opposite way passing an on coming airplane at at least 20 times the airplanes speed. Made the plane look like it was standing still. 5 minutes later 7 fire and police vehicles came roaring by blazing their horns and sirens. Lived here 8 years and have never seen more than three or four go by. Chased them down and found them down a side road and were told to leave that it was just a fire???  Sounds a little like Kecksburg to me.  NOTE: The above image is a rendering.