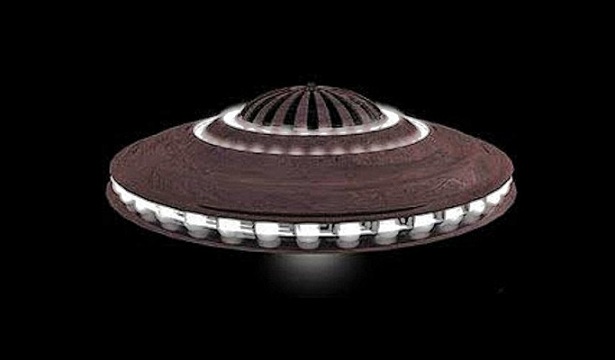 At first it seemed like an airplane approaching my place with unusually bright light (VERY BRIGHT). However, it was same color, from anticipated wingtip to wingtip; orange to yellow, VERY bright. I thought it was a plane, just unusual and VERY bright lights, and wanted to take a picture, but it was short past sunset. Although still like normal day for the eye, the camera only got darkness with a glowing thing. It came closer and thus I saw more of its shape, got confused, ran for the magnifying hunting glass I had stored away. Through the glasses, it had the size of a 1 or 2 EURO coin. However, at that time it was almost over me. To my big surprise, no more lights – and no wings. It was a round disc in dark gray, similar to how military forces would paint their crafts. Since it looked on approach like a plane, it must have been a quite flat disc. It definitely lost a lot of height between first spotting the bright light and the flyover. The only sound I heard was some sort of humming like of a generator in the distance – and that may well have been it. I’ve heard similar sounds a lot here and never got the source. Probably the ironworks, train line or somethng else. So my best guess is, all was silent. I’m close to two airports. I’ve seen many and very unusual planes, but that turned out to be a surprise. I don’t know any disc-shaped planes and all planes still have visible lights when they fly over me. I checked flight radar and there was no matching aircraft registered for that time period and flight path (west to east). I could provide the photo, but better not. The camera completely failed. It wasn’t dark and it just got a bright orange dot with camera shake trail while to the eye it wasn’t a dot on that distance plus clouds as well as trees/leaves in the distant were easy to be seen.  NOTE: The above image is a rendering.