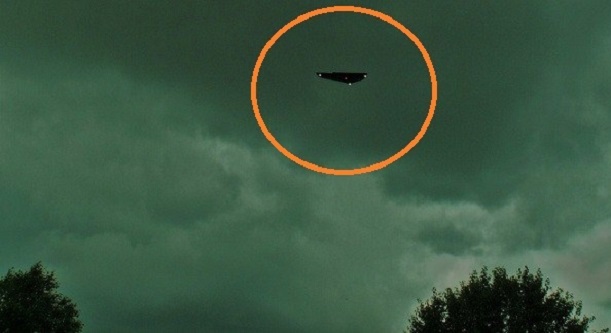 A Lewisham family of UFO buffs are looking for other witnesses to an “intelligently-controlled” triangular object which flew over their house towards Kent.  Les Burlington, 68, first spotted the UFO – a bright white light in the sky moving from their Cliffview Road house towards Hilly Fields – on February 22 at around 8.45pm as he was putting out the recycling.  He called to his son Andrew, who was inside watching an online video about the Roswell incident, and they both watched from the back garden, making out two white lights, one of which turned red “for about a second.”  Andrew Burlington, 38, said he had ruled out the UFO being a Chinese lantern as it moved slowly and changed direction a number of times.  He said: “Whatever it was, we all agree on one thing – it was being intelligently controlled.”  The computer repairman said: “It appeared to be at flying at the same height as some low cloud that we could just about see in the sky because it went behind them briefly.  “The object circled over our garden a couple of times and above the roofs of two houses in Fossil Road before moving off in an easterly direction towards Kent.  “My dad viewed the object through a pair of binoculars and thought it looked triangular in shape, but admitted it was difficult to make out the true shape of it due to the sky being dark.”  He went on: “I ran back upstairs to my room and watched it slowly disappear off into the distance.  “What struck me most about the object was the fact it was completely silent and there were no flashing lights on it.  “We often get police helicopters circling nearby areas and they are always extremely noisy and have flashing red, green and white lights on them, so I think that rules that out.”  The pair – who both claim to have seen unexplained phenomena in the sky before – want other people to come forward who may have seen the UFO, which appeared to pass over Lewisham High Street.  Mr Burlington, who has contacted top Canadian UFO expert Darin Crapo about the sighting, said: “If anyone can prove to us that it was something conventional, we will accept it.”  Although the family did not capture footage of the incident, Andrew Burlington has created a computer image of what he saw and believes this UFO spotted over Pennsylvania last May closely resembles the Lewisham object.  NOTE: The above image is a rendering.