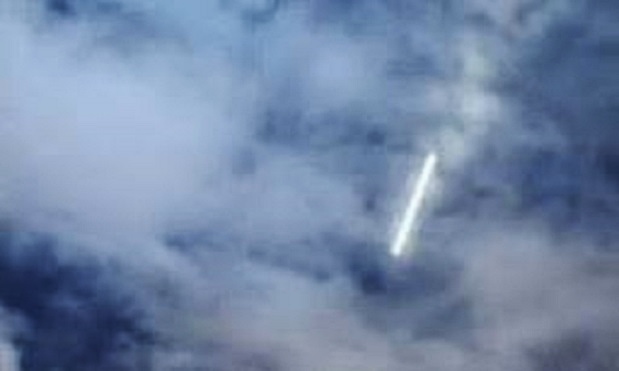 My girlfriend and I both saw a UFO at the same time. We both saw it from inside of our car. We were driving back home to Montgomery County in Maryland from Howard County in Maryland on Route 108. We were driving from the east to the west, specifically from the northeast to the southwest, more or less.  I believe we were still in Howard county around the town of Clarksville – or Highland – when we saw the UFO on the right side of our car – the passenger side. It was not very far away from us, as there were some tall power lines – or a cell tower of some kind – off the road in the field to the distance from us on the right of our car and a bit ahead of us as we traveled toward  it on the left. It’s hard to tell if it was one tower or a series of power line towers  but I will look more closely the next time we drive by and see what it actually is and exactly where it is in relation to the road (Route 108). The UFO was moving toward the tower – and then STOPPED!  It stopped by the tower right after we both noticed it up in the sky. It was NOT very far away from us. My girlfriend asked, “What is THAT?!” … I saw it, too, at the same time and also said, “Yeah, what IS that?!”  “It’s not a plane, I can tell you that.” she added, as she rolled down the window to try to hear any sounds coming from it. I slowed down the car. Neither of us heard anything at all. Then I said, “It’s not a helicopter, either, because I can’t hear anything – and that’s too big to be a helicopter – and planes don’t just STOP like that.” It had red and green lights that were slowly going on and off. The lights were the first things we both noticed before seeing the object itself. It appeared horizontally long, like a metallic cigar in the sky by the tower. Then my girlfriend said, “I have a creepy feeling. We should speed up. Whatever that is, I have never seen anything do that before.” So, I sped up, and as I did so, the object began to move again and was heading in OUR direction. My girlfriend said, “It’s coming this way, toward the road.  GO!” So I went even faster, and she took her seat belt off to look at it pass over the car and off behind us in the direction of the area behind my side of the car – back from the area of Howard county where we were coming from, back in the northeast direction, sort of.  She looked at it as it sped off quickly, and the lights disappeared – and then the object itself disappeared. There was no sound of a helicopter or an airplane going over us from up above as you would normally hear. Then it was gone – and we continued to drive back home.  NOTE: The above image is a rendering.