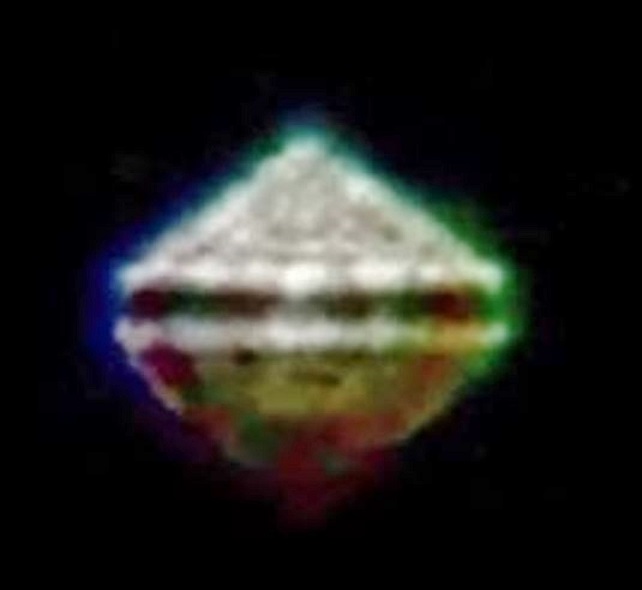 We were camping at the Pine Creek Campsite near Bayfield, CO, where two of our party had previously witnessed UFOs/strange lights in the sky. The craft appeared in the gap between two peaks, which is slightly west of true north. Initially, it looked like a single, white light, an excessively bright light, in fact. It’s hard to explain, but it was really, really bright – WAY brighter than any other plane or star. However, as it drew closer the white light seemed to separate into three smaller white lights in a perfect line with a red light hovering above it. Presumably, this was the top of the craft as it seemed to be descending.  The truly interesting thing about this craft was that it was incredibly low, perhaps even 500 feet or less above our heads. It flew directly overhead and seemed to bank slightly before disappearing into the south – perhaps over Vallecito Reservoir.  As it passed overhead and banked it became clear that this was a diamond-shaped craft. Small lights lined all four sides, delineating the diamond shape and showing the outline of the craft. From our vantage point we could see the underside of the thing which seemed to have four or five red lights (one at each corner and one in the center) and a series of three or four round white lights in the front and four slit-like lights toward the back.  It moved slowly and took about thirty seconds to travel across the sky. It made a low, rumbling roar, but did not resemble a plane in any other way. I have no idea how large it was, but it seemed pretty big, at least as big as a jet, maybe bigger.  About an hour and one-half later another craft appeared from the same general area and traveled the same general path. It seemed exactly the same, appearing as an extraordinarily bright single white light and then showing us the three white lights and single red light as it drew near. As before it was very low. Once again there were small, white lights around the perimeter, three or four white lights at the front and three slit-like lights in the back. The only difference was that the five lights at the corners were green and not red.  NOTE: The above alien craft was spotted over Pescara Italy on November 6, 2013.