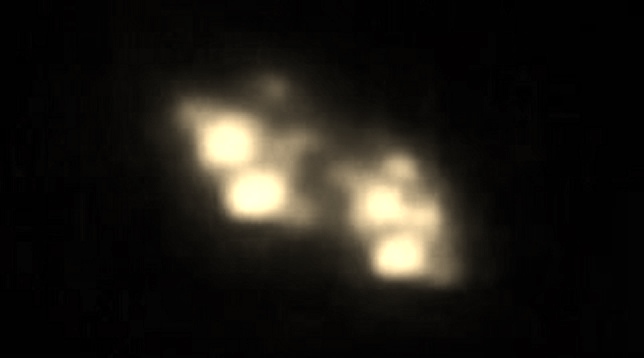 A drowsy mother in Carteret saw the flickering golden lights in the sky and ran for her camera. A hard-boiled Navy veteran traveling the New Jersey Turnpike spotted the slow-moving, bright-yellow V-formation and pulled his car to the shoulder to get a better look.  Police officers on patrol at 12:40 a.m. yesterday couldn’t believe their eyes.  Within the hour, Carteret police dispatchers said they heard from at least 15 callers reporting strange orange flares blazing high above the Arthur Kill. The eerie glow had people at backyard barbecues mesmerized, with heads upturned and mouths agape. Almost 75 vehicles pulled over on the New Jersey Turnpike to watch the spectacle.  But no one seems to know what caused the luminous vision. Police could not identify the source of the lights, and Newark International Airport authorities reported no unusual flight patterns. A meteorologist with the National Weather Service said nothing in the atmosphere would have caused the bright disturbance, and an airman at McGuire Air Force Base said none of their military planes were in the air at that hour.  Whatever it was that lit up the sky above Carteret was by all accounts weird.  “It wasn’t fireworks, and it couldn’t have been a hot-air balloon, not at night near the airfield,” said Steven Vannoy, who pulled over on the turnpike with his girlfriend on their way home to Perth Amboy. “What we saw last night qualifies as a UFO. It was an unidentifiable flying object.”  A Carteret police sergeant on duty called the State Police and neighboring departments in Linden and Woodbridge to find out what was causing the strange glow, but he said none had received reports of the lights. Bob Wanton, a National Weather Service meteorologist in Mount Holly, had no explanation for the lights. “Weatherwise, there was nothing that would have caused it,” he said. The aurora borealis, a spectacular show of light high in the northern hemisphere, is seldom visible in New Jersey, said Wanton. The lights normally appear in the winter, he said.   “It’s very unusual for the northern lights to come down this far, especially at this time of year,” he said. On Staten Island, a spokeswoman for the 123rd precinct in the Tottenville section suggested the display might have come from a nightclub on Arthur Kill Road that frequently uses search lights for promotions. The club had been ordered closed by a judge on July 11 and its phone was disconnected yesterday. Airman First Class Andre Steverson said no planes from McGuire Air Force Base were flying at that time. An operations manager at Newark International Airport said there were no reports of unusual activity and said the lights “could have been almost anything,” from a group of military helicopters on flight exercises to a blimp.  Maybe, said David Stich, who saw the bursts of light from his back yard in Carteret. But those flares didn’t look to him like spotlights or anything else he could recognize.  “I never in my life saw anything like it,” said Stich, a lifelong Carteret resident accustomed to the roar and flight path of aircraft from Newark. He compared the lights to volleyballs, dwarfing the surrounding stars, and said they clearly moved in formation.  Around the corner, Pam Russell’s husband woke her to see the show. She saw a diamond-shaped pattern in the sky and noticed smaller lights leading the pack and bringing up the rear.  “I ran for my camera,” said Russell. “But they disappeared.” Afterward, she said, the skies were dark and silent.  NOTE:  The above image is a rendering.

349 thoughts on “MANY WITNESS STRANGE LIGHTS OVER CARTARET NEW JERSEY”