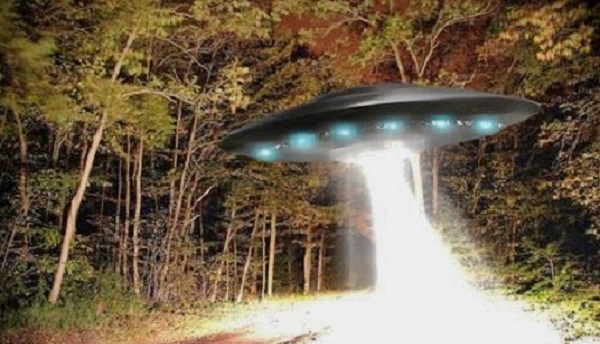 I was traveling south. One block south of me and traveling north toward me, a dark grey and black saucer-shaped craft topped the hill. It was as wide as the three lanes of traffic and had two red triangular lights on either side in a similar position to where the parking lights are on an automobile but on the bottom edge.  However, no light from these reflected onto the ground and they were not bright like headlights, but they were large rectangles and most definitely red.  The largest part of the craft was very dark gray and the top “bubble” part was black. This craft was only a few inches off the roadway. My light changed and as I proceeded toward it, it was as if something came between us and it was no longer visible. As there was nothing there to actually come between us, I feel as if it “cloaked ” itself, but it was gone.  This area is very well lit as there are street lights on either side and there are businesses on both sides of the road so my visibility was excellent. At this time of morning, there was no one else on the road except for it and me. This road runs directly behind my house and this happened 1/2 block north from my backyard.  I went home and immediately called my friend who I had just dropped off and told her about it. However, over a period of 20 minutes, we were only able to maintain a phone connection for about 5 minutes, as our call would get dropped and I would get the message “Call Failed” which never comes through when a call is dropped but rather when it doesn’t go through to begin with.  I would try to call her back and it would do absolutely nothing. Just like dead air. She left me a voicemail message but my phone had not rang. She would call me and get the same nothing. One time, I called her and as the phone was ringing, it sounded as if there was a third party on the line and I could hear! some scratching like claws on a piece of wood but just when the call should have gone to voicemail, it just disconnected and I got the “Call Failed” message.  She said when we finally were able to talk that she had never experienced anything like that ever before with a cell phone. I hadn’t either. I was unable to go to sleep until about 6:00 a.m.  The next day she told me that she had checked the Arlington Police Dept. active police “blotter” after we hung up and that from 3:00 a.m. until 3:30 a.m. there had been 9 calls to 911 that were only classified as “disturbances” within a 1-mile radius of where this occurred and my house.  She tried to take a screen shot of this information, but it would not work. I can get a copy of that night’s activity from the police department, but cannot do so for 30 days. At that time, I will forward you a copy of that to go with this report.

NOTE: The above image rendering