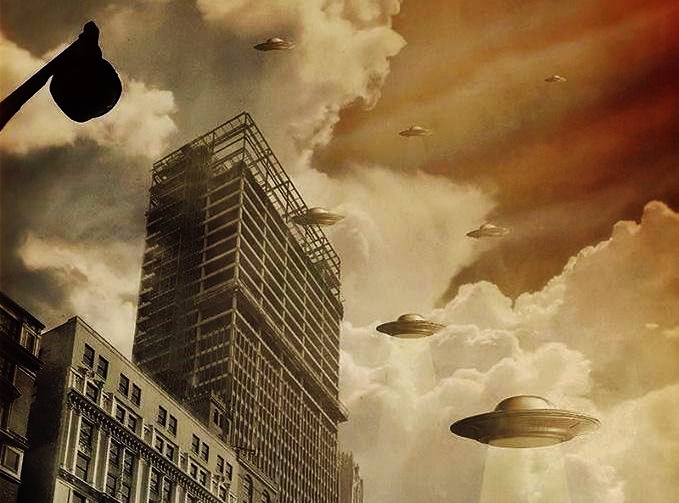 4TH OF JULY, 1960    ……………   MANHATTAN
The two men watched with great interest as the black object drew closer while seeming to maintain altitude. It was a few days after the 4th of July of 1960, the day a UFO Circled the Empire State Building.  Tom was a broadcast engineer in New York City. He worked on the 16th floor of a building on West 50th/51st Street next to the Taft Hotel. Tom says he first noticed the object simply as a black dot in the sky coming from the southwest on a northeasterly course.  Of course Tom was puzzled by what he was watching for nearly ten minutes. Then a colleague in an adjoining studio area hollered, “What the hell is that thing?”  The two men watched with great interest as the black object drew closer while seeming to maintain altitude. Tom tells us, “The object itself was spherical, and it was flat black with no windows. It was about 16 feet tall and not quite as wide.  “It had winglets that sloped down from the middle as it also sloped up from the middle. The object undulated from side to side at a constant rate throughout. About twenty or so degrees one way and then tilted the same in the other direction.”  The object reduced its speed and began to slowly circle the Empire State Building at a distance of perhaps twenty feet from the windows on the 100th floor. By this time, Tom was being joined by other broadcast engineers as they watched in awe at the scene playing out a mere 16 blocks away on 34th Street at the Empire State Building.  Tom tells us that a colleague telephoned engineers staffing the transmitter site high up at Empire State Building but folks there could see nothing of the object that was circling the skyscraper.  Back at the 51st Street location more than 20 broadcasting engineers and news staff had gathered including the Director of News for the Mutual Radio Network. All of them were witnessing this incredible event until the object leisurely left the area returning on the path where it came from.  The peculiar thing that occurred wasn’t the sighting of the UFO but rather the lack of reporting of the event. In a room full of broadcast news professionals this event was never publicly reported. Tom doesn’t tell us why this happened.  In fact, Tom only reported this event in recent years to MUFON. He does tell us that not long ago he saw a program on cable television that showed a UFO filmed near a building in Mexico. What rattled him was that the UFO in Mexico was identical to the one that he and his colleagues observed on that hot July afternoon 54 years ago.  “I realize this is a most strange sighting, especially since people only feet from it and looking through a window saw nothing… ” Tom explained.  Finally Tom remarked, “… it remains relatively fresh in my memory.”  NOTE: The above image is a rendering