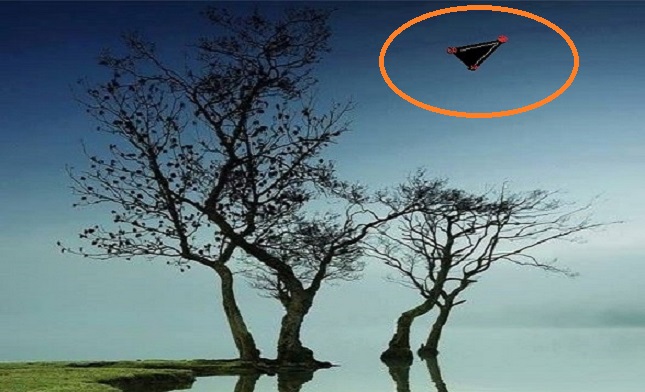 Ohio witnesses near Amberley Village reported watching a low flying, triangle-shaped object with multiple lights that quickly disappeared behind nearby tree tops, according to April 24, 2014, testimony in Case 55744 from the Mutual UFO Network (MUFON) witness reporting database.  The two friends were traveling together about 2 a.m. on April 20, 2014, along a dark road when the object was first seen.  “I was just looking out of the windshield when I suddenly noticed the craft flying silently and quickly across the sky,” the reporting witness stated. “My friend noticed it next and was just as surprised and excited by it as I was.”  The witness described the object.  “We watched as it flew across the sky before us at a pretty low altitude, not far above the trees. It was a black triangle with many lights on it. It happened too quickly to count how many lights there were but I remember that there were solid white lights at each tip. Not actually on the very tip – they were still under the craft. There were also a few white lights both solid and blinking in the center with a blinking red light in the center as well. I can’t remember too well but I don’t think the red dot was in the center – it was off to one side. We only saw the underside of the ship as it flew over us.”  The witness stated that there may have been a low hum coming from the object.  “It was totally silent from what I remember. There may have been a low hum – my memory isn’t perfect – but if there was I don’t remember it. It just flew right over us and disappeared behind the tree tops. It was a very exciting experience. But it happened too quickly to get a picture unfortunately.”  Amberley, also known as Amberley Village, is a village in Hamilton County, population 3,585. Ohio MUFON is investigating. Ohio has a current UFO Alert Rating of 3 with a high number of recent reports nationally. Ohio had 24 UFO reports in March 2014 – the 5th highest reporting state – while California had 103 reports – the highest reporting state in the nation.   NOTE: The above image is a rendering.

THANKS TO ROGER MARSH AND