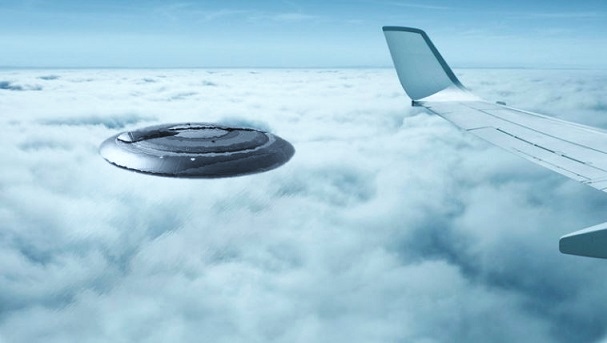 On the morning of July 10, 1947, Mr. John H. Janssen, editor of the Daily Record (an American aviation journal) was flying his own plane from Morristown Airport in New Jersey.  He spotted six, luminous spherical craft with hazy rings around them flying in a trail high in the sky above him. He grabbed his camera and shot a picture. He was only able to get four of the six objects in the image frame.  Two weeks later, on July 23rd, he had another encounter of what looked to him like the same or very similar aircraft. He was again flying his airplane out of Morristown and was at 6,000ft.  “While my eyes played over the horizon, I became aware of a shaft of light that seemed like that of a photographer’s flash bulb. It came from aloft, very high up. It was above that position over my plane’s nose that flier’s call 11 O’clock.  At first I thought it was merely the reflected sun bouncing off the sides of an exceedingly high flying aircraft. I gave it no more thought. But then the engine of my own plane began to perform peculiarly. It coughed and sputtered spasmodically.  So I pulled on the carburetor heat and gave it full throttle hoping to thaw any ice that might be accumulating in the carburetor. The engine emitted one final wheezing cough and then quit. Now, the nose of my plane, instead of dropping to a normal glide, remained… rigid… fixed on the horizon, in its normal level flight attitude.  Abruptly, I became aware that my plane was now defying the basic law of gravity. I became frightened and close to panic at so weird a predicament. I saw that the airspeed indicator was at zero! There was now an odd prickling, electric-like sensation coursing through my body.  I had an eerie feeling that I was being watched and examined by something that minutely studied my features, my clothing, and my airplane… I flicked a cold bead of perspiration from my eye. Then I saw it! Above and slightly beyond my left wing tip was a strange wraith-like craft, one of the flying objects! Its flanged and protecting rim was dotted on either side with steamer-like portholes.  It seemed to radiate a dull metallic hue that conveyed an impression of natural strength, and a super-intelligence not of this planet. It was motionless. Perhaps a quarter of a mile away… beyond, and slightly higher, I could see another (similar) object, seemingly fixed in the sky. I assumed that the second strange ship was but waiting for the one nearest me to complete its examination. Then I had the most unaccountable urge to reach up and snap on the magneto switch. I had turned it off when the engine quit. I switched both magnetos to the on position.  Slowly the propeller began to turn… then the engine burst into a steady rhythmic roar. The plane nosed up into a stall, dropped off, picked up airspeed and steadied under control,” recalled Mr. Janssen.  NOTE: The above image is a rendering.