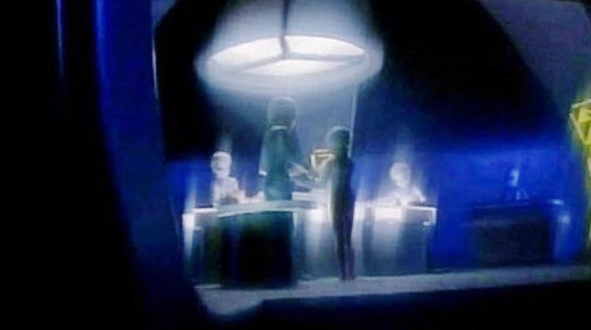 Telepathic aliens are targeting Wales in a bid to harvest our superior genetic material – that’s according to “abduction victim” Hilary Porter.  While Hilary’s stories may sound outlandish or unbelievable, she dismisses those who scoff for being closed minded.  The 67-year-old sought-after speaker and ufologist is claiming a stretch of road between Swansea and Cardiff is a “hotspot” of alien activity  Hilary says she was so traumatised by her abduction that she was too scared to return to Wales for four decades.  When she did finally return in 2009 to visit a friend in Llanelli, she drove through the danger area unharmed – only to be abducted from her bed within a day of arrival.  Hilary says she has been abducted so many times she has lost count and is convinced that aliens are already among us and only a government cover-up continues to keep it a secret.  “They know what is going on but they are absolutely powerless to stop it,” said Hilary.  However, the active member of the British Earth and Aerial Mysteries Society (BEAMS) believes the tide is turning as people increasingly come forward with their own tales of alien abduction.  Later this month she will be among a host of speakers at the Anomalous Mind Management, Abductee, Contactee, Helpline project (AMMACH) conference, which is expected to attracted hundreds.  Hilary, who has had two experiences of aliens in Wales, holds the belief that extra terrestrials are targeting the Celtic tribe.  The first occasion was in September 1970 as she drive home from a holiday in Ireland with her now ex-husband.  She said as they headed towards the original Severn crossing, they suddenly found themselves on the outskirts of Cardiff outside a garage with no idea how they had got there.

“It was damned frightening. We just blacked out and had no idea how we got there,” she said.  “I didn’t feel well at all. My husband thought we must have gone to sleep, but that didn’t explain how we got there.”  Also unexplained was how the petrol level in the car hadn’t gone down, she said.  “When we got home I got changed and found triangular suction marks on my stomach, blood suction marks. I thought ‘flipping hell, look at that.”  The marks themselves quickly disappeared and it wasn’t until seven years later that Hilary had a dream of travelling in what appeared to be a hexagonal spaceship.  Within a short space of time she started suffering flashback memories which, she believes, began to reveal what had really happened in Wales.  Today after years of studying “experience phenomena”, she has come to the conclusion she was teleported by aliens from another dimension.  “They transport you molecularly and can create portals in a wall or closed door,” she said.  “In the flashbacks I was on a beach and could see this alien being who was about 6ft tall and wearing green coveralls.  “I couldn’t see his face but he could communicate mind to mind and had a box around his neck for seismic testing and warned me that he was going to cause an earthquake.”  When he did, they were forced to run, she said, and she got into a small round vehicle which took her and the alien on to a small oval UFO.  “I thought ‘flipping eck’,” she said.  She later created a drawing of the flight deck of the UFO which shows a consul and an alien moving a series of levers, which she describes as looking like those in an old fashioned railway signal box. “Clearly a cover memory,” she said.  She believes the relatively pleasant events she recalled had been created by the aliens to hide the real nature of the traumatic experience she actually underwent.  On the second occasion, she said she woke at a friend’s house to find she had an unexplained black eye.  Hilary revealed that her research has led her to the conclusion that aliens target certain human “tribes” who genetic make-up is of more interest.  “The Celtic tribes from Wales, Scotland, Ireland, Cornwall and Brittany are definitely on the list,” she said.  “They are trying to make alien human hybrids and it seems the genetic material of these races are more compatible.” – WalesOnline  NOTE: The above image is a rendering.

23 thoughts on “POSSIBILITY THAT THE ALIENS ARE TARGETING THE WELSH”