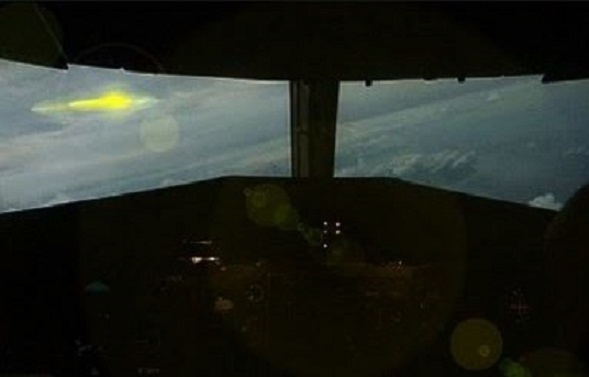 On February 10, a US Navy flight, Atlantic – Continental Air Transport Squadron one, located at USN Air Station, Patuxent River, Maryland, was out of Keflavik, Iceland at 49-50 degrees north latitude and 50-03 degrees west longitude about 150 kilometers [90 miles] west of Gander, Newfoundland out over the Atlantic Ocean.  The aircraft was probably bound for Gander to refuel judging by its position and course of 230 degrees true, though the report does not mention this.  US Naval Reserve Lieutenant Graham Bethune, co-pilot of Flight 125, was occupying the captain’s seat on the left side of the cockpit in the passenger plane when he first sighted a huge object [at least] 300 feet in diameter on a near collision course with their aircraft.  The co-pilot stated in his official report,… I observed a glow of light below the horizon about 1,000 to 1,500 feet above the water. We both, the pilot as well,  observed its course and motion for about 4 or 5 minutes before calling it to the attention of the other crew members.  Suddenly its angle of attack changed.  Its altitude and size increased as though its speed was in excess of 1,000 miles per hour. It closed in so fast that the first feeling was we would collide in midair.  At this time, its angle changed and the color changed. It then appeared definitely circular and reddish orange on its perimeter. It reversed its course and tripled its speed until it was last seen disappearing over the horizon.  The co-pilot’s report goes on to say that the object came within five miles of their aircraft which was borne out by radar evidence of the encounter because the object had been tracked by DEW Line Ground Radar at the base in Goose Bay, Labrador.

When the plane landed, the entire crew was interrogated by AF Intelligence officers. At their destination, Patuxent Naval Air Station in Maryland, the pilot and the rest were questioned again by Naval Intelligence and required to sign full reports. Later, a government scientist (supposedly from the CIA) confidentially showed the pilot secret UFO photos – one portraying a disc like the one over the Atlantic.  In a final interview, the commander was interviewed by Air Technical Intelligence officers at Wright-Patterson AFB. But none of the Navy or Air Force men, or the government scientist, would answer any questions about the UFOs. NOTE: The above image is a rendering.