Bonnybridge has become the UFO capital of the world with more than 300 sightings of Unidentified Flying Objects reported above the town every year.  It is a small town in the heart of central Scotland. But Bonnybridge has earned its place in the unexplained history books along with Roswell, in New Mexico, and even the Bermuda Triangle.  Councillor Billy Buchanan says so many residents come to him with concerns about what is happening in the town’s skies that he has appealed to three prime ministers – David Cameron, Tony Blair and John Major – to order an urgent investigation.  As yet no official investigation we know of is underway.  The Ministry of Defence say they are “satisfied that there is no evidence that the United Kingdom’s airspace might have been compromised by hostile or unauthorised foreign military activity.” 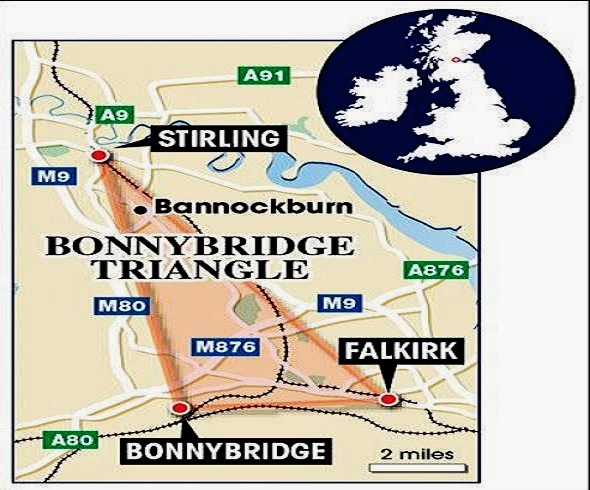 But mysterious sightings in the area known as the Falkirk Triangle, which branches from Bonnybridge to Stirling and Fife, continue. Everything from space ships landing to mysterious balls of light have been reported.  Some unexplained sightings have even been caught on film.  Publicity concerning the sightings started in 1992 when businessman James Walker said he noticed some strange lights in the sky while driving home.  At first, he thought they were stars but was startled when he saw them move and assumed a triangle shape. Around the same time, the Sloggett family reported one of the most extraordinary sightings from the UFO hot spot.  They claimed to have been walking towards Bonnybridge at around 7 pm on a clear March evening when they saw a circle of light ahead of them.  They said the light appeared to land in a nearby field. The family continued on their journey, but say they were stopped by a football-sized blue light hovering above the road ahead of them.  Later, Isabella Sloggett said: “My daughter Carole and I saw a UFO land right in front of us. A door opened and there was a howl-like sound.  “I screamed and ran off terrified.”  Since then, further UFO sightings from this alleged portal to another dimension have come thick and fast. Several people who live near Bonnybridge have separately filmed what appears to be strange white objects hovering in the sky.  NOTE: The above image is a rendering