On October 11 2013, I had driven to our local grocery store around 10:30 pm to grab some snacks as they were closing at 11 pm. It was storming outside but the trip there and back only took me about 15 minutes in total.  As I exited my car to go inside my home I noticed an object hovering in the darkened sky to the South. Although I live not far from the local airport I am very familiar with aircraft flight patterns and this did not look like any aircraft I had ever seen in my entire life. I pulled out my Lumia phone and started the video recording mode.  The object looked almost cylindrical and was illuminated from within. It just sat motionless in the sky slowly and randomly pulsating different colors. Even with all the lightning lighting up the whole area, I could still see it sitting there not moving at all. The sky was really flashing with lightning and it started to rain quite hard to I ran into the house to get out of the weather.  Inside I started playing around with the phone trying to show my wife the video. As I had not had the phone very long I was unable to get it working to show her. I gave up after about 30 minutes and over the next couple of days it faded from memory. 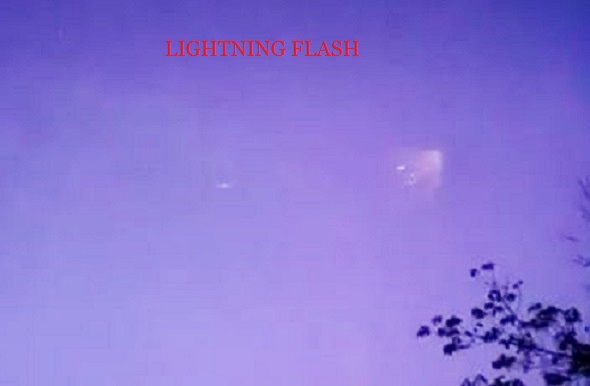 About 6 months later I discovered that I had cloud service for the phone data and lo and behold I was able to recover the video on my laptop.  I was very happy to show my wife and son what I had seen that night, but what I hadn’t expected to see is what appeared in the sky along with what I had originally recorded.  I was shocked to see to the right of the hovering object slowly appeared a shimmering cone of tendrils that seemed to sit motionless in the sky as well.   It glowed and was bright enough to be seen even with the lightning going on.   I had never heard of anything like it being caught on video before, so I hope to see if anyone else has reported a similar incident.  KENS NOTE:  The amazing part of this case file is that the craft seems to go into stealth mode when the sky is lit up by the lightning.  Alien technology at its best. Check out the video below.

CHECK OUT THE VIDEO HERE– http://www.ufocasebook.com/2014/ufo-video-ontario-canada-2013.html