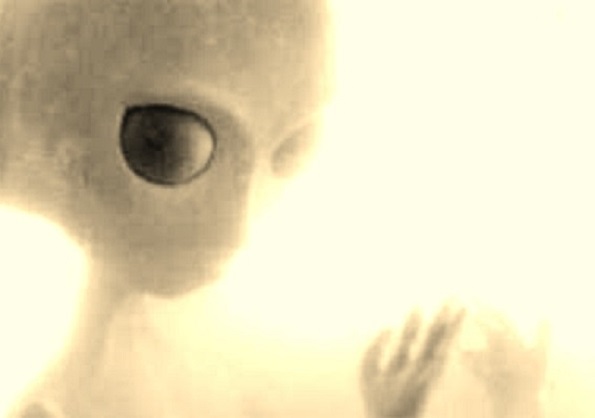 When I was nine years old , in the summer of 1989, I believe I lived in a small trailer park in Colorado Springs, Colorado with my mother. My mother was dating a man who lived down the street from us. One evening when we were at her boyfriend’s trailer, they had an argument that lasted late into the night, and at around 3am my mother awoke me so that her and I could walk home to our own trailer.  Our place was directly down the street from my mother’s boyfriend’s place. Our trailer park had a few street lights, but not many, and I remember it was extremely dark out. I held my mother’s hand, and my eye focus was on my feet and the street before me.  When we were about four trailers away from our own trailer, the street lit up all around me and my mother. We stopped and looked up, and directly above us was a large, round craft. I have no recollection of seeing it move up to us, it was just there. Because I was a child at the time, and had no sense of measurement, it’s hard for me to now say exactly how far above us the craft was, but I’m going to guess it hovered around 30 feet above us. It was close enough that it literally took up the whole sky; I couldn’t see anything beyond it. It didn’t move, it remained stationary above my mother and myself, and we stood motionless watching it in return–I have no idea for how long.  It was perfectly circular, and in the center were three, round white lights positioned in the shape of a triangle. The craft itself was a lighter gray color. There were rows of square, orange and green lights that curved with the round shape of the craft. I don’t remember exactly how many of the orange and green lights there were, or their exact configuration. It was like six or seven green lights in a row on one side, then a few orange lights in a row on another spot. I saw a lot of (I guess) tubing and mechanical looking stuff–I’m not sure how else to describe it. I’ve drawn a rough picture of the craft, but because I don’t understand all of the mechanics I was looking at, it’s a very basic interpretation of what I saw. There’s no way I’d be able to recreate it exactly; that would almost be like trying to draw a circuit board, or an engine.  As far as my feelings and reactions to the craft; I first want to say that I don’t recall ever feeling any fear. It was more along the lines of fascination and curiosity. I never felt threatened at any time. The first thing I actually remember thinking and acknowledging was that the craft barely made a sound. It was just a slight humming, and the wind didn’t stir or anything. The air was all calm around me. That was something that seemed abnormal to me, as though seeing this thing in the first place wasn’t abnormal enough. It seems like the next thought process I remember was the actual realization of what I was looking at. I vaguely remember thinking something along the lines of, “They really are real”, and somewhere deep down, it’s almost like I remember feeling a form of happiness. Almost like a familiar happiness; something I had felt before, or related to a feeling I had felt before. My memory of the craft itself pretty much ends about this time, so the memory of those last feelings are a bit muddy.  Next thing I knew, me and my mother were walking up the porch steps to our trailer. My recollection comes back as I’m taking the first couple steps up the porch. I remember looking at the steps, my sight turned a bit to watch my mother’s feet go up the steps, then I looked at my hand which was being held in my mother’s hand still. I remember at that point looking up at my mother’s face; she looked straight ahead, and continued to walk to our front door. I remember thinking, “Why isn’t she saying anything? Does she know what just happened?”  We get to the door and she puts the key in the lock, and it was at that point, before she turned the knob to open the door, that she looked down at me and asked if we just saw what she thought we saw. I just remember shaking my head, yes. She said that we shouldn’t tell anyone about it, and not to talk about it ever. We both went straight to bed, and I don’t believe either of us looked at a clock. Because of this last fact, I can’t say whether or not we lost any time, or if I simply lost my memory of the craft leaving and the walk home.   The next day it ended up being all over the local news and radio that somewhere around 200 people (I believe more than that, actually) had been calling in UFO sightings all throughout the night, many of whom lived in our general area of the city.  NOTE: The above image is a rendering.

1 thought on “MOTHER AND CHILDS ALIEN ABDUCTION IN COLORADO”