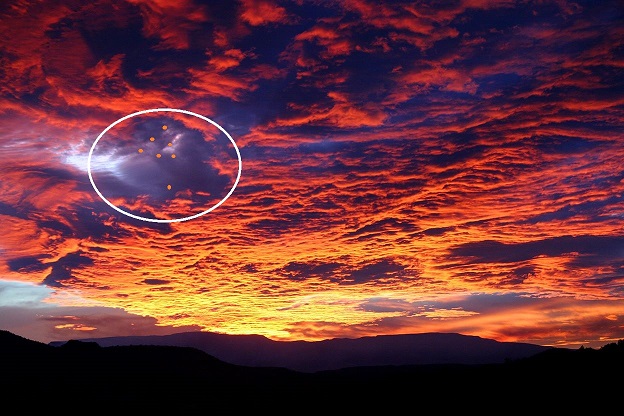 I was driving southbound in the Port of Newcastle approximately ½ km from the shoreline of Lake Ontario. Southwest of my position and over the water of Lake Ontario, I witnessed a group of seven slow-moving aircraft.  I guessed their speed to be comparable to that of ultralight aircraft. I judged them to be at a distance of less than five miles and approximately two thousand feet in the air. Their shape was not immediately discernible.  Six of them were spaced evenly at approximately two hundred feet apart horizontally, with uneven variances in elevation of possibly 100 feet. The seventh was flying alone at a similar altitude, but following the formation at a distance of roughly 1 km. They were distinguishable at this time only by a crisp, bright circular orange light representing each craft.  As they moved slowly through the sky, I judged them to be flying in a South to Northwest direction. As they traversed an angle of approximately 70 degrees from my position, I saw the orange light flicker and disappear from each craft beginning with the lead vehicle.  At this time I speculated that this was because the light was projecting forward from each vehicle, and as the vehicles passed by, the source of light was not visible from my angle of observation.  Because the western sky was still relatively bright at this time of night, I was able to discern the shape of each vehicle in silhouette. All of them appeared to be perfectly round in shape.  No sound was discernable from any of the craft at any time.  Local trees began to obscure my view. Total observation time was less than two minutes.  NOTE: The above image is a rendering.