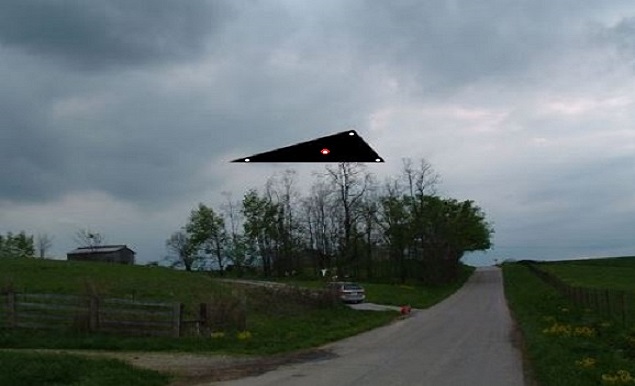 Rod Engberson is a witness to strange aerial activity in Grass Valley. His home overlooks Beale AFB and the activity over the base and the surrounding area is mystifying to say the least. I will let Rod explain in his own words what he is witnessing:  It started in the year 1999 driving past Beale Air Force base I witnessed what I believe to be a TR3B. I had not seen another one until 2013. The one I saw in 1999 was black on one side and chrome on the other. It was about as wide as a football field. I saw it at about 9:30 a.m. There were three of what I believe to be recon planes were circling around this chrome object.  We were standing on a pull out on the road that overlooks Beale AFB and saw three blinking white lights come up from the base. They were all individual lights. They fly through the air towards where we are standing. They fly overhead in a single file line, perfectly spaced apart from each other. They were completely silent and floated through the air effortlessly, taking turns blinking on and off.  There was no hard object to be seen, just balls of energy, light. They float off towards the Sierra Mountains keeping their formation. They were about 2,000 ft. off the ground.  I (Rodney) was standing on the same pull out on the side of the road that overlooks Beale AFB and it was dead silent outside. I could feel something above me so I looked up and saw nothing. But it felt weird and I still felt something was there. As I was thinking something was above me, a white light in the center of a black triangle came on above me.  It was about 200ft above. It stayed there for about a minute silently. No noise or movement. As soon as I thought to myself, “oh wow, no noise” it moved away slowly making a quiet sound as if small puffs of air were being released. It disappeared as it flew over a hill to the north. Special Note: Rodney showed me photos of triangle shaped UFOs that have a red light in the middle of its underbelly and white lights at each triangle corner. The photos that I saw are the same type of photos that were taken in Belgium, during their triangle UFO flap.

OBSERVATION OF THE NIGHT SKIES:

My UFO Hunters witnessed what appeared to be two satellites approaching each other and as one of the satellites gets close to the other one, it powers up (gets brighter) and this was witnessed by 6 investigators. Also, a large moving object is going across the night sky and it powers up, the light is very intense. I have never in my life seen satellites power up.  We are also seeing bats, regular satellites and conventional blinking light aircraft. Everyone observes a strange red globe that moves across the night sky and then changes to a solid white globe. What conventional aircraft does that?  The globe was solid red, then became solid white, I am baffled. No blinking lights. Weird. If I can’t tell you what I am seeing, then it’s unidentified, it’s a UFO.  Tonight was a very interesting night, like I said, I never saw objects in the sky ‘power up’ and then ‘power down’. That is so bizarre to witness and I have no explanation for it.  NOTE: The above image is a rendering.

The host unit at Beale is the 9th Reconnaissance Wing (9 RW) assigned to the Air Combat Command and part of Twelfth Air Force. The 9 RW collects intelligence essential for Presidential and Congressional decisions critical to the national defense. To accomplish this mission, the wing is equipped with the nation’s fleet of U-2 Dragon Lady, RQ-4 Global Hawk unmanned aircraft, and the MC-12 Liberty reconnaissance aircraft and associated support equipment. The wing also maintains a high state of readiness in its combat support and combat service support forces for potential deployment in response to theater contingencies.  The 940th Wing is a Reconnaissance, Command & Control and Intelligence unit assigned to the United States Air Force Reserve. The 940th Wing is responsible for the stand up and total force integration of the Air Force Reserve Command’s newest multi-mission wing, including command & control, intelligence and reconnaissance forces in support of Air Combat Command, Pacific Air Forces and the Air Force Intelligence, Surveillance and Reconnaissance Agency.  Beale AFB was established in 1942 as Camp Beale and is named for Edward Fitzgerald Beale (1822–1893), an American Navy Lieutenant and a Brigadier General in the California Militia who was an explorer and frontiersman in California. It became a United States Air Force base on 1 April 1951.

16 thoughts on “UFO STRANGENESS OVER BEALE AIR FORCE BASE”