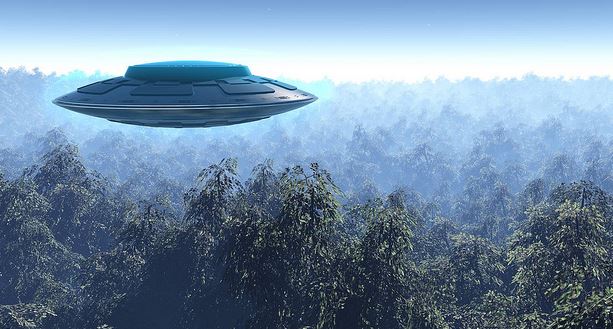 It’s high season for sightings – Grace never expected to see a UFO, the size of an aircraft carrier.  Grace was working at a TV commercial film shoot in upstate New York. The various crews had just wrapped the shooting for the day. In Grace’s van there were ten members of the crew; everyone was anxious to return to their hotel in Middletown, NY.  While driving on NY State Route 12, most of the crew members on the left side of the van nearly in unison remarked, “What is that?”  In the sky was a reddish-orange object and it continued to get closer and closer to their van. At first none of the folks could really make out what it was they were looking at.  Graces says, “We all agreed it was not a plane or anything else we had ever seen.”  The only thing everyone in the van certainly agreed on was that the object was getting bigger and bigger, and it was getting increasingly darker outside as the sun was setting.  “Some of the folks in the van were on the verge of freaking out,” Grace explained.  The road began to be curvy and led into a forested area where they lost sight of the object. As their van came around a small turn in the road, there was one of the other crew vans stopped. All of its crew members were out of their truck standing in the middle of the road looking up in a dazed manner.  The driver of the van slammed on the brakes. After the vehicle, stopped the engine died, and everybody got out.  “Above us was this unbelievably enormous ship, silent hovering just above the tree line,” Grace said with a tone of wonder in her voice.  Grace clarified what it looked like very specifically, “it was a dark metal, and it was larger than an aircraft carrier, when we saw it at tree height. The circumference had baseball diamond shaped colored lights that changed color, but not in a pattern, they just changed colors, pink orange, blue, and yellow.”  The group of film artists and technicians stood huddled together gazing up in awe for about 5 minutes.  “…and then in a second, it pulled away, without a sound and it did so, incredibly fast.” Grace explained.  After the craft disappeared, the van the other crew had been driving in started up. One of the crew electricians told us their truck had stopped when the craft had gotten close to the tree line.  Later at the hotel the two van loads of crew shared their encounter story with the rest of the shoot team.  “They just thought we were all nuts.” Grace moaned.  Interestingly enough the local newspaper reported that a large crowd in the parking lot of the local supermarket had also seen the UFO. Grace says, “I still talk occasionally to a few of my fellow witnesses and we are still all freaked out, because it was so unmistakably huge, so close and so real.”  After a moment to reflect, Grace remarked about the long term impact of that night 26 years ago. “… It has left a huge mark on my life, and on how I see our place in the universe. I think of it in a very good way. It really forces you into a bigger perspective!

KENS NOTE: Apparently the TV film crews equipment was also not working.  The vehicle they were driving in stopped working and came to a stop.  This happens many times when there is a Close Encounter.  NOTE: The above image is a rendering.

AND  ”by Cheryl Costa