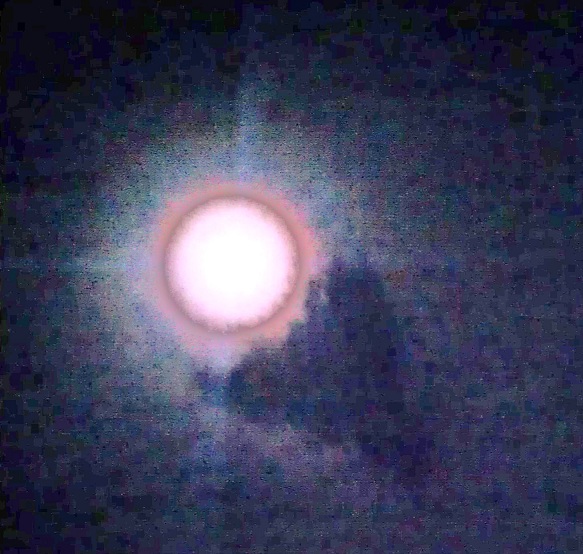 I was returning home from work traveling N/B on SH31 in Oxford Twsp. Warren County in my work truck. At approximately 2230 hrs. I was passing the Warren County Recycling center (County Dump)when I noticed an object come over the trees to my right. I leaned hard forward in my seat and looked up into my windshield near the headliner and noticed a nickle sized (at arms length) perfect triangle shaped object with 3 steady lights, one in each extreme corner. The object, although dark out could be seen, possible due to both overcast and ground light conditions. It appeared metallic with smooth rounded corners, not unlike an artists conception of the rumored USAF TR-3B “Flying Triangle.” At this point I felt a bit anxious but was doing my best to look at it without running my vehicle into a tree or worse. With haste I drove to the traffic light at the intersections of SH31 and SH46 in White Twsp. and pulled over to get a better look. After dismounting from my vehicle, I realized the object was gone; however where the object was a moment ago there was a faint glowing “puff of white” (cloud, smoke etc….) This cloud was motionless. I took two pictures of it with my smart phone prior to continuing down SH46 W/B. After making a quick turn onto Warren County 519 I pulled into the White Twsp. Recreation Center and again dismounted. The puff of white was still in the southern sky. At this point I took some more pictures and shined my spot light at the object flashing my light on and off at it with no reaction. When first looking at this “white puff” in the sky I thought maybe it could be the moon behind thick clouds but when I got back to my residence and zoomed in the pictures others and myself could see what appeared to be a triangular shaped object in the “puff of white” as if it was attempting to mask or for lack of a better term, cloak itself. There were some high flying commercial aircraft in the area at the time that I could observe and clearly make out as same. There was also vehicular traffic in the area going about their business, seemingly unaware. The puff that I observed in the sky, may in fact have nothing to do with my observations of the triangle as I lost sight of it and did not see the triangle change or move. It should be noted that this is the second time that I have observed an object like this in New Jerseys Warren County, the former of which was reported. NOTE: The above image is from Wall New Jersey and taken on Feburary 3 , 2012