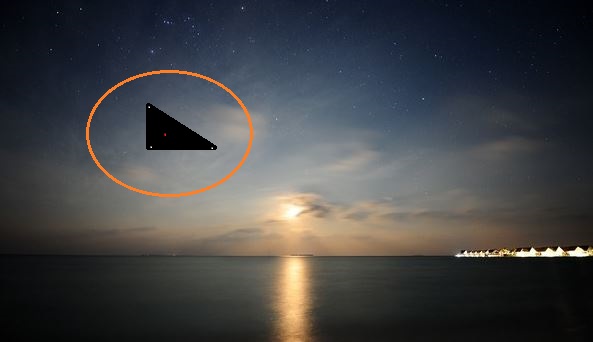 We were at work on 6th floor of outside pool deck checking pool operation at 9:30pm. We noticed a large light about 1-2 miles out at sea not moving and looking down at the water. Light was stationary and not moving. Light started to move towards us cause we could tell the light was getting bigger. The object started to turn right cause the light started to turn right. At first we thought it was a coast guard helicopter because the station is at the Brigatine inlet where we work at the Revel casino. The coast guard are always do minuvers and rescue training. We still did not hear any noise at all. As the object approached the large light went out about 1/4 mile from us. The object passes over head and was like a wedge shape, almost triangle but not. There was a small blue light at each tip on the under side but nothing up front. The object passed over and as it passed buy we heard a slight noise like someone putting their finger to their mouth and telling you to ssshhhhhhh. The width of the object was about the same size as a commercial plane. If the object kept its same course as it flew over it was headed right towards the atlantic city airport and the air force nafac air base where the F-16 fighter jets are that patrol the east coast. We lost sight of the object because the casino tower where the rooms are blocked our view. We ran over to the side of the building but were still obstructed by the tower. From the first sighting of the light out in the ocean we were very curious because it made no noise and the light on the front of it lit up the ocean like when the moon first rises above the water. After seeing the object we just kept commenting to each other how cool it was and wished we could have seen it again and closer. NOTE:  The above image is a rendering.