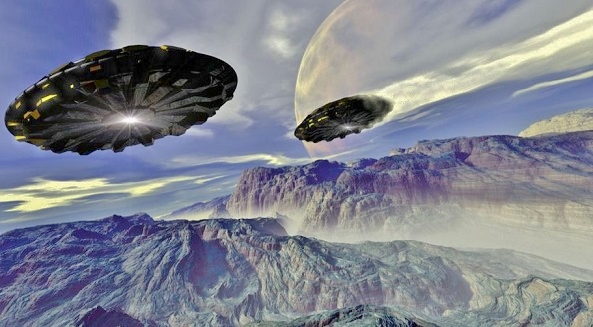 I was working outside just after my lunch break. Out of the corner of my eye I noticed what looked to be a red-copper colored object in sky to my left.  I stood up straight and really focused on the object. It appeared to have lights and a surface that reflected light off as metal does.  It was also black at times as well. It appeared to hover for a while and very slowly travel on a path that changed slightly as it progressed through the sky.  I have to stress one thing. The first time I noticed this thing, it was directly over the airport. My company is building condos and houses beside our cities airport and it is closed airspace.  Nothing public or private can fly without authorization.  Which leads to why I was curious as to what this slow moving completely silent object was. At first I thought it to be a hot air balloon but I asked myself, “why would it be and who allowed it to fly directly over the airport and the landing strips?”  That would create a chance of an airplane crashing into it or the ground. It took about 3 hours to get almost right over my head. As it was moving around and stopping during these hours, I began to notice it looked more like a metal upside down bell rather than an air balloon made from fabric.  I really don’t claim to know what it is because I have never seen anything like it before. There was what looked like a bright light on it as well.  It never got any dimmer or changed color, but just stayed constant. It was completely silent as it traveled through the sky. I stopped randomly between working and tried the video recorder, but the object simply disappeared from sight. It would not show up on video.  The object turned slightly as it moved but you guys tell me what this is.  I couldn’t find any records of aerial pictures of city nor reports of anything happening at airport. When the object just simply disappeared and I could not see it anywhere in sky I thought this to be extremely weird.  Seeing as it had taken so long to get to my location and I could see it anywhere in the horizon, it’s like it never happened really.  After the object was gone, 2 army jets made multiple passes over the area. They returned then flew off again out of site only to return and do this again.  I’m at a loss as to what I saw and am not discounting anything; as long as it’s realistic and logical.  NOTE:  The above image is a rendering.