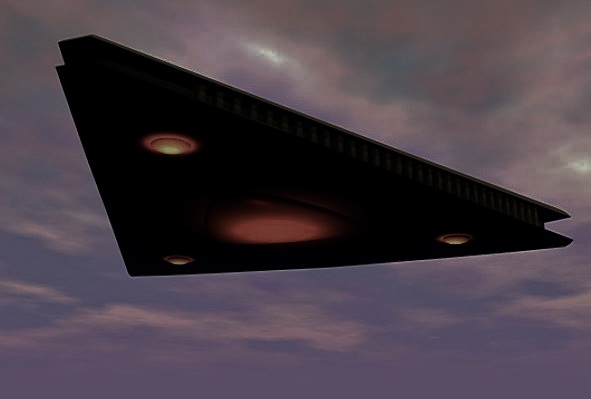 During a period spanning just over two weeks in early to mid-August of 2014, three UFO sightings were reported from Jasper County and adjoining areas of its neighbor to the south, Newton County.   In this column and in the near future, my intention is to inform my readers on all three of them. (My personal investigation into one incident of the trio is still in progress, and additional information on the other two may also be obtained.)  The first occurred at 5:12 a.m. on the morning of Aug. 2, and the lone witness was a Missouri State Trooper driving north on Rangeline Road in the course of routine patrol.  (Margie Kay, the Mutual UFO Network assistant state director, who had interviewed him, provided a transcript which was then posted on the UFO Casebook website, one of the best.)  The officer first observed an unusual light in the northeastern sky, not far above the horizon. His first thought was that he was seeing a helicopter, since it was obviously too low to be a fixed wing aircraft.  Then as it got closer, he was able to make out a triangular or teardrop-shaped craft with illuminated windows in the upper portion, through which he could see indistinct movement that he assumed to be passengers or crew members.  The craft was estimated to be in excess of 100-feet in width and perhaps a fourth of that in height. At its nearest point to the witness, a distance of approximately 50 feet, red and yellow lights of various sizes were noted on the underside and a low hum could be heard emanating from the UFO.  There was also evidence of a minor electromagnetic effect occurring at the moment the odd craft abruptly pivoted to fly off back to the east (at an undescribed speed) until it was no longer visible.  At the moment the UFO performed its 180-degree rotation there was an approximate 15 second burst of static from the car’s radio. Adding to the mystery was the fact that the patrol car was stationary in the roadway after the object departed, although he did not remember stopping or even intending to do so, and the encounter had not seemed to last for 15 minutes as the vehicle’s clock indicated.  (Before we take off into any wild speculation based on these seeming discrepancies, it should be noted that the excitement of the encounter at such close range could have easily been the culprit.)  Finally, in an element that is often reported in such cases, the trooper watched a jet come from the east, making a wide looping curve to the north before returning to the east. If it was not searching for the unknown craft, its presence and maneuvers were quite a coincidence.  The investigation into this potentially important encounter is ongoing. MUFON is still delving into it, and I have put out “feelers” to some of my own reliable sources in the area in an effort to not only learn more about the trooper’s experience but to possibly locate other possible corroborating witnesses.

Less than two weeks after this undoubtedly unnerving encounter, a more typical event took place in the community of Sarcoxie, a relatively short distance southwest of the earlier sighting.  The lone witness (gender not specified) had brought their dog outside and noticed a bright white light in the east-southeastern sky. It continued to grow in size until it reached the point of appearing as a luminous white sphere approximately one quarter the angular size of a full moon.  (The witness’ wording seemed to indicate uncertainty as to whether the orb actually increased in physical size or simply appeared to from the object coming closer.)  After moving a short distance to the south, the UFO reversed the process and became smaller and smaller until it was no longer visible. The entire incident had transpired in about one minute.  NOTE: The above image is a rendering