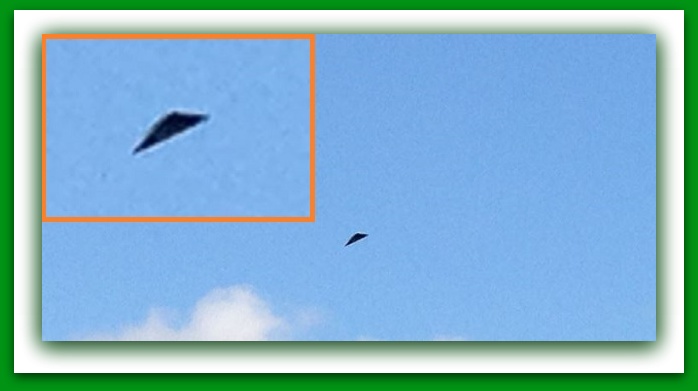 Early evening sitting on my patio at 18:40:35 on Dec 16, 2013 I noticed a small black object hovering in the sky to the north of my back yard.  The object did not move at all. At first I thought it may be a kite but it just hung there and to be honest I now realise that there was no wind on that day.  I grabbed my iPhone and took three photos at different magnifications. In two of the photos there is a television antenna on my back neighbour’s house.  I  watched the object for a while and then went back inside. Next time I came out it was gone and I didn’t see in which direction it went.  I did nothing about these photos but kept them. Today, I watched a mocumentary called “The Phoenix Incident” written and directed by Keith Arem. In the film, they showed a triangular craft being pursued by an F-15 and it reminded me of my photo. I am a UFOlogy enthusiast and watch Hangar 1 all the time.  Originally I wrote this off as an anomaly; however, now I am not so sure. I really don’t know what it was but it was weird to just be hovering.  The attached photos are untouched and taken with an iPhone 5.