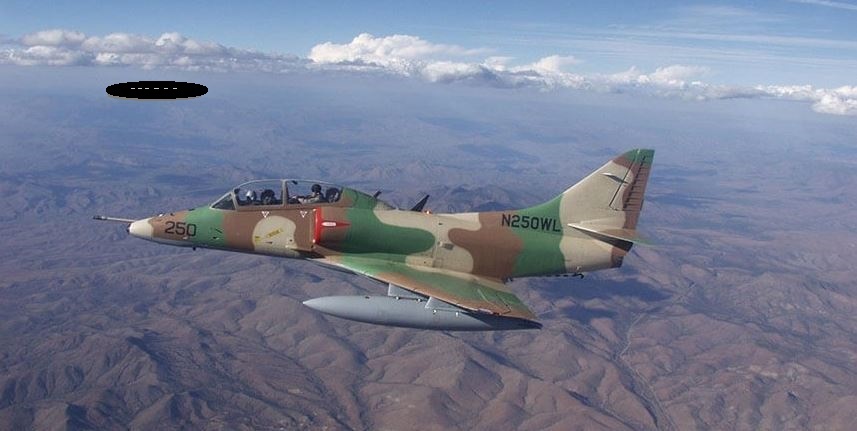 MILITARY JET CRASHES AFTER SAUCER CLOSE ENCOUNTER
.
OCTOBER 23, 1974   ………….   MARIA TERESA ARGENTINA
.
One accidents, which remained unexplained to this day, took place during the month of October 1974, during test flights commemorating the 26th Aeronautics and Space Week.  On Wednesday the 23rd of that month, a Douglas A-4B “Skyhawk” fighter bomber, manned by Lt. Jose Van Deer, crashed in the vicinity of Maria Teresa to the south of Santa Fe Province. The pilot managed to activate his ejection seat, thus saving his life.  According to information provided by a “duly identified person living in the city of Venado Tuerto”, a group of isolated witnesses claimed seeing a large object only moments before the accident. Even farmers herding their animals confirmed the presence of an airplane – a military one – that appeared to be escorted by an enormous ** metallic disk ** that vanished in a matter of seconds. In the light of this situation, military authorities commenced the pertinent investigations in order to ascertain what the witnesses had seen, and to the greatest extent possible, identify the “strange vehicle” that local residents had connected to the airplane accident.  The unusual attitude taken by Lt. Van Deer is also curious. In his nervous phone conversation from the María Teresa train station, he employed such expressions as “mechanical difficulties brought about by magnetic phenomena.” There was talk among train station employees – based on information given by Van Deer himself, that within the cockpit, the entire airplane was magnetized.  Some of the fragmented parts of the phone conversation between the pilot and members of the Argentinean Air Force was picked up by a yard control dispatcher at the Belgrano “Rosario Norte” Train Station. Utmost secrecy surrounded the event. However, as the witness had been ordered, he took great care not to disclose what he knew, yet weeks later, he was removed from service, abruptly and inexplicably.  NOTE:  The above image is CGI.
.
KEN PFEIFER WORLD UFO PHOTOS AND NEW
WWW.WORLDUFOPHOTOS.ORG
WWW.WORLDUFOPHOTOSANDNEWS.ORG
THANKS TO WWW.PHANTOMSANDMONSTES.COM
.
.