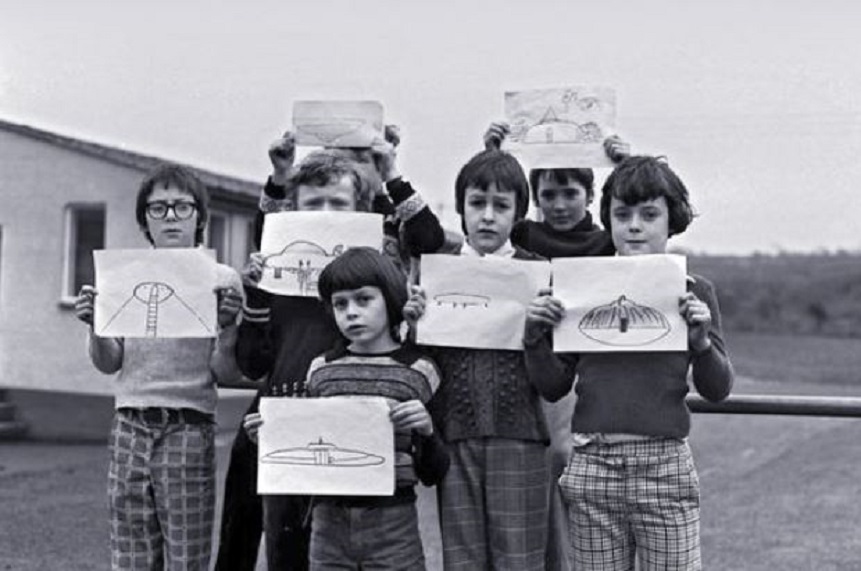 Schoolchildren claimed to have seen a UFO in a nearby field in 1977, but their teacher did not believe them. They did not have an idea then that it was the beginning of a series of events that stay unexplainable until today.  The lovely sandy beach of the small Pembrokeshire village of Broad Haven in South West Wales has been the favorite spot to enjoy for most visitors to the area. Some find enjoyment in passing through on the Puffin Shuttle bus. Looking at the small village from the outside, the place is just a traditional Welsh seaside resort.  But going into below the surface, there’s confusion, uncertainty, and many questions – just like the classic television science fiction series The X-Files.

Just this week, locals gathered at the village hall to finally attempt in finding answers that have eluded them for 40 years.  Flashback to 1977, something had made the children at the local school to come running all of a sudden into their classroom with their hearts probably pounding with fear.  The children outside claimed to have seen a mysterious silver object hovering over a field beyond their playground.  Headmaster Ralph Llewellyn did not believe the pupil’s claims and dismissed it without going outside to check the reason. Little did he know, it was a decision he would regret in his entire life.  Today, those children, who already adults, maintain there was only one depiction of what they had witnessed – an unidentified flying object.  Schoolboy David Davies was on the playground when the incident took place that February Friday afternoon. He stood looking at something that would leave him with a fascination and drive to dig in the truth of what was that thing.

.
He says that it was pearlescent silvery-grey with about 40 feet long and a shape of a torpedo, cigar-shaped. He adds that it had an upper domed section that covered the central third of the UFO and topped with a pulsating red light. However, their claims were being ignored and David, along with his classmates, passed a petition to the police station.  The headmaster separated the schoolchildren and asked them to draw the UFO they had just seen, and he was amazed to see their drawings were almost the same to each other.

UFO enthusiasts formed a pilgrimage to Broad Haven to celebrate the 40th anniversary of an event in a place known as The Welsh Triangle.  The incident has brought a media frenzy to the tiny farming community in what became the beginning of a series of sightings.  Weeks later after the incident, couple Pauline and Billy Coombes saw a seven-foot humanoid figure in a silvery suit at the windows when they were watching television in their isolated farmhouse late at night. They did not see the face as it was just a black space.  The police investigators who were called to the scene later confirmed that the family couple was so frightened that they did not want to go outside their house. Later in the same year, it was reported that the entire herd of cattle disappeared only to reappear in a faraway field.  The number of sightings continued to grow as well as the interest on them. Rosa Granville, a hotelier residing close to the school, claimed that she saw an apparent upside down saucer late at night when she was awakened by a light coming from it in the field next to her hotel. The object was said to emit flames with two humanoid creatures without faces, but with pointed heads.  Rosa reported the incident to the authorities and a Squadron Leader from nearby RAF Brawdy visited her. The Squadron Leader told her that nothing was unusual on the field and there was nothing that could cause someone to see the strange craft. However, he also asked her not to tell anyone what she had witnessed.

.
Close to the area of the sightings were high-security military bases, including RAF Brawdy. In the height of the Cold War, RAF Brawdy was believed to be the facility where a top secret US-Soviet submarine listening station was situated but disguised as an oceanographic research center.  The Ministry of Defence did not admit that time that they were carrying out an official inquiry into the affair. It was later reported that the RAF in West Wales was tasked to perform a discreet probe on UFO and alien reports while telling the media and the public that it was no defense significance.  Forty years later and the Broad Haven people are still seeking answers. Recently, a public meeting was held to address questions about what took place back in 1977.  Mr. Davies, the former schoolboy, is now in his fifties and still maintains he observed what he saw. He described what he witnessed during the meeting.