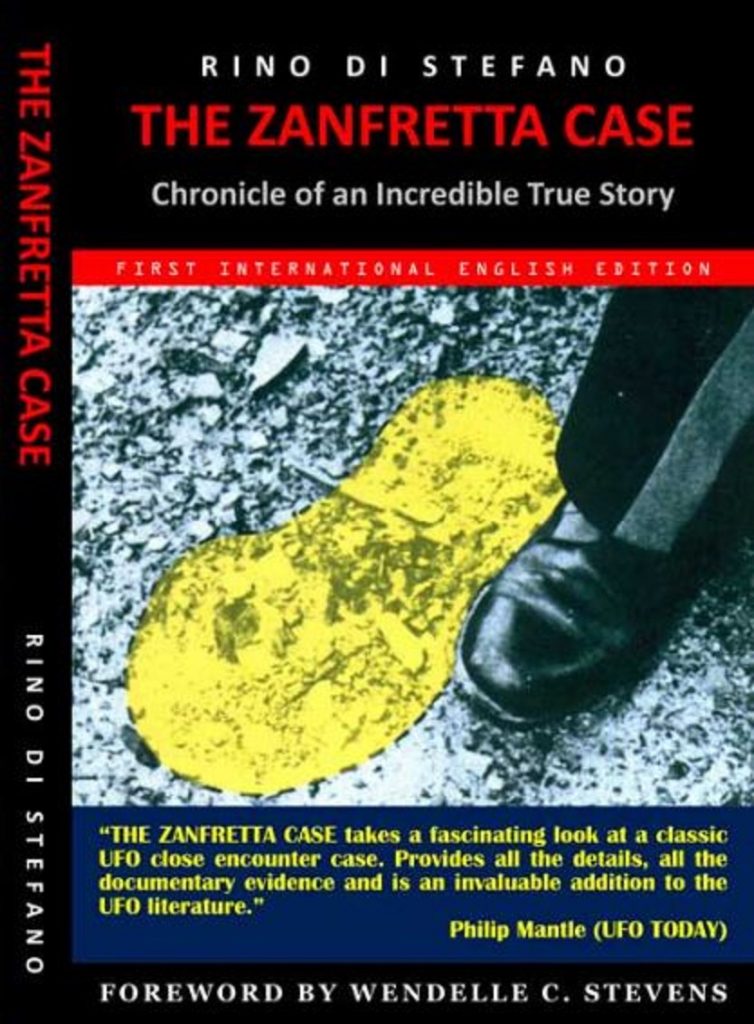 Shortly after midnight on the 6th, an Italian security guard’s patrol car mysteri-ously quit running. At the same moment he saw four strange lights and stepped outside to investigate with gun in hand. Suddenly, he was struck from behind. “I  whirled and shined my flashlight and saw  this enormous green being,” he recalled. It is the last thing the guard remembers— in his conscious mind — until 105 minutes later when he found himself stunned by the blinding light and heat of a space-craft blasting off into the dark sky. Two weeks later, a group of experts listened in amazement as the 26-yearold guard, Fortunato Zanfretta, recounted under deep hypnosis the full details of his incred-ible UFO encounter. Their conclusion was that he was telling the truth. “I believe 90 percent of what he said was the truth,” said Dr. Mauro Moretti, the top medical hypnotist and physician who hypnotized him. And police say they found physical evidence to support the security guard’s story — a large, horseshoe shaped burn mark where the spacecraft was sup-posed to be and a 20- inch footprint which “could only have been made by a giant foot,” a police spokesman said. Zanfretta, a family man with a reputa-tion for honesty, was making his rounds in the village of Torriglia at about 11:30 PM when he saw strange lights at a cli-ent’s unoccupied villa. “As soon  as  I  saw  them,  the  engine,  headlights,  and  radio  in  my  car  stopped working,” he recalled. “I took my gun and flashlight and went to see what was happening. I started to walk around the house. Someone pushed me in the back, like a punch. I whirled around, shined my flashlight and saw this enormous green being.

The ET escorted him to a very large, triangular spacecraft with several portholes and a round or semi-circular base. “He said there was brilliant light inside the craft and it was very hot,” Dr. Moretti continued. “There were rows of instruments and control panels. Inside there were about 10 ET beings like the one he had met outside. All the beings  looked alike and they had fingers like ours.” Though they spoke no Italian or any other Earth language, Zanfretta said they communicated with him by “light signals and sounds” transmitted through a hel-met placed on his head. The helmet was so tight it gave Zanfretta a headache, Dr. Moretti said. Zanfretta  did  not  need  hyp-nosis  to  remember  what  happened  when  the encounter was over. He recalled: “The next thing I knew, I was standing in the dark, feeling groggy. The being was gone. I picked up my flashlight from the  ground and ran toward my car. “As I ran I saw this great, blinding light rise up. It was a UFO. I only saw that it was flat, triangular and white.

It was enormous and it gave off so much light and heat that I couldn’t see it clearly. When the space-craft was gone, Zanfretta glanced at his watch. It was 1:15 AM. He assumed he  had fainted when he first saw the entity  and had regained consciousness sec-onds before the craft took off. Giovanni  Cassibba, another guard, was sent to find  out what was wrong and found Zanfretta sitting in his patrol car, looking dazed. “His face was cold but his head felt hot,” Cas-sibba said. “He was in a state of shock.” The guard’s boss, Gianfranco Tutti, said: “I don’t believe in creatures from other planets, but I do believe in Zanfretta…” A huge triangular-shaped object also chased off two Chilean Air Force F-5E  fighters at supersonic speeds — and then  vanished mysteriously into the upper at-mosphere with other jets in hot pursuit. Af-ter an incredible chase that ended when he was forced to make a “combat dive” to escape, Capt. Lira Bustos declared, “I can now believe in other civilizations on other worlds. “The incident occurred on the 16th when a platoon of police in the town of Calama, along with thousands of civilians, spotted a giant UFO in the sky. Four jets were sent aloft and, follow-ing ground radar instructions, picked up the UFO at an altitude of 15,000 feet. The craft rose almost straight up as the jets approached, keeping the aircraft about 5000 feet below it. “Suddenly it appeared to be heading right at us,” recalled Capt. Lira Bustos. “I was scared. I hit the radio. ‘Verify that what I’m seeing is coming right at us,’ I  radioed.” Another jetfighter pilot, Cmdr. Javier Pratt Corona confirmed the UFO —  “an immense triangle with intense lights joining the edges” — had changed di-rection and Capt. Lira Bustos and another pilot went into a steep dive to avoid the craft. Comdr. Pratt Corona and another pilot, Lieut. Jose Fernandez Martin, then took up the chase as the Extraterrestrial craft headed skyward again. “I was   shocked when I first saw it close,” recalled  the lieutenant. “As I passed beneath it, it appeared to be completely staticliter-ally suspended in air. It gave me an eerie feeling in my gut. It’s impossible that any normal aircraft, with the huge dimen-sions of the triangle, could maintain itself airborne, completely stable.”