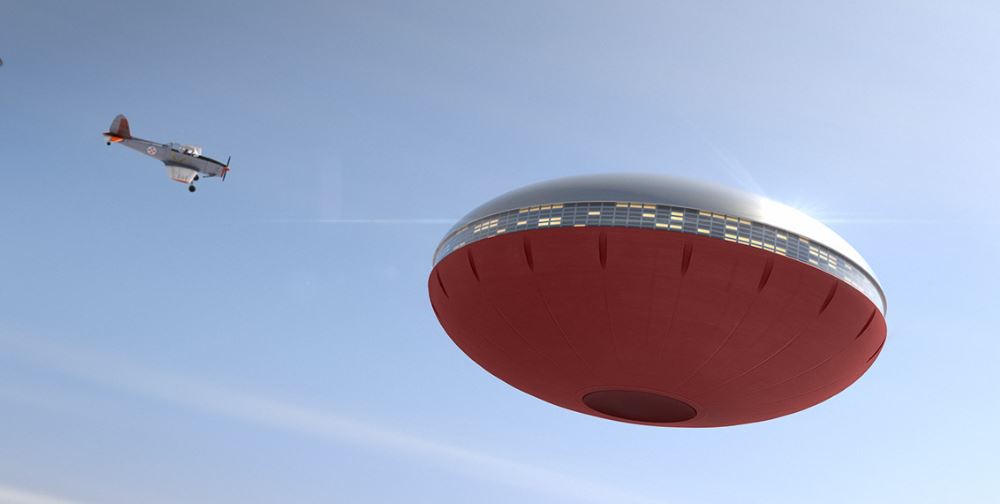 On the morning of November 2,1982, Captain Júlio Miguel Guerra a flight instructor member of the 101 Portugal’s Air Force squadron was flying a DHC-1 Chipmunk for an aerobatic training. At about 10:50 a.m. at an altitude approximately of 5,000. He noticed below to his left, near the ground, another “aircraft.” This airplane seemed to have only a fuselage, it didn’t have wings and it didn’t have a tail, only a cockpit and it was oval in shape. In order to investigate, Guerra turned his airplane 180 degrees to the left in order to follow and identify this “object,” which was flying to the south. Suddenly the object climbed straight up to his altitude of 5,000 feet in under ten seconds. At first with some instability, oscillations, wavering motion, and then it stabilized remaining still.

This object seems to be a metallic disc composed of two halves, one on the top and another on the bottom, with some kind of band around the center, brilliant, with the top reflecting the sun. The bottom half was a darker tone that seems to be red or brown. At first it moved with his aircraft, then it flew at a fantastic speed in a large elliptical orbit to the left, between 5,000 feet to the south and approximately 10,000 feet to the north, always from left to right, repeating this route over and over. Right away, He realized it was an unknown object, and called the tower and told the controller that there was a strange object flying around him. He, and others from three or four other airplanes, said it must be some kind of balloon. Some of the pilots flying in other zones made fun of it, and He responded by asking them to come and see it with their own eyes. Two fellow Air Force officers, Carlos Garces and Antonio Gomes, communicated over the radio that they would join him to tag this ”object”.  When they arrived to Guerra’s location they stayed with him for about ten minutes while the object kept up its circular pattern, each loop almost the same as the previous one, and they conversed on the radio. Guerra was in the interior of the orbit and they were outside of it, so the object passed between the two planes. Because of that, they could estimate the size relative to the length of the Chipmunk’s fuselage. At various times the object had been very close to him and He was able to verify that it was round, with two halves shaped like two tight-fitting skullcaps. Carefully He looked at the lower half of this object and he noticed that had a hole or dark spot in the center. The middle band looked like it had some kind of grid, and possibly a few lights, but it was hard to tell since the sun was so bright.

After about ten minutes, Guerra decide to make an interception. He communicated to the two Air Force colleagues of his intentions. Since the object’s speed was much faster than Guerra’s airplane, He flew directly to a point along the trajectory of its elliptical course. The object came toward Him and flew right over his Chipmunk, positioning stationery right on top of his aircraft, like a helicopter landing but much, much faster, breaking all the rules of aerodynamics. This craft now was hovering, only about fifteen feet of him. Then without notice, flew off in a flash toward the direction of Sintra mountain to the sea. This was witnessed all the time by the two other pilots no far from Guerra’s airplane.  Right after landing, all three pilots filed detailed, independent written standard reports about the incident, and their planes were checked for damage, but they didn’t hear anything more about it from anyone in the Air Force, and they were not interviewed by the military. A little later, General José Lemos Ferreira, the Portuguese Air Force Chief of Staff at the time, authorized the release of all the records to a team of scientists and experts.

The scientific team studied all the data and the three pilot reports, after a meeting of all thirty investigators in Porto, in 1984, the group provided a written analysis of more than 170 pages. Among their findings, they determined that this craft was clocking more than 300 mph when flying vertically. They could determine its velocity to be about 1,550 mph when flying around Guerra’s plane. This speed is incredible, especially given the maneuvers it was making around the aircraft. The investigators did everything they could to understand this case, but they could not find an explanation for it. They concluded that the object remained unidentified.  NOTE The image is CGI.