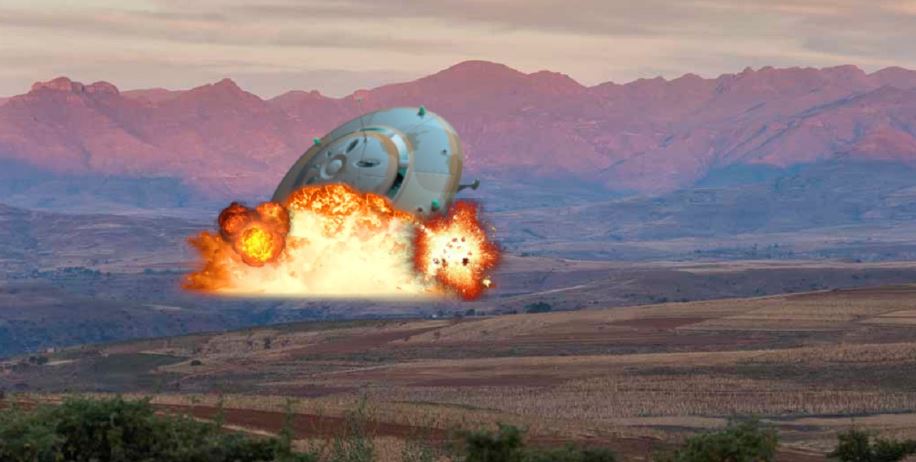 The apparent crash and recovery of a UFO in the Kingdom of Lesotho in September 1995 is surrounded by legend.  However, it does appear to fit a pattern of clandestine operations regarding the recovery of extraterrestrial technology by the South African military.  According to farmer, Peter Lachasa, at around 9:15 pm on the evening of 15th September 1995, a “strange sound” from the sky overhead disturbed the serenity of the night. It also disturbed his cattle and livestock who were now making their fright known through a cacophony of cries. Before he had a chance to take a look outside, a “dull explosion” rang out. It was then that Lachasa ventured out to investigate.  Several neighbors of Lachasa had already made their way down to his property by the time he opened the door. They had been watching the strange light in the sky for some time. According to them, the object began to descend slowly towards the Lesotho foothills. However, it would explode upon hitting the ground “giving off a series of blinding flashes”.  The small group, led by Lachasa, would head towards the impact site. As they approached it, all could hear an “electronic humming” noise which was clearly emanating from the crippled craft. It was a dull grey metallic color although any further details were hard to examine as there was an “intense heat” which radiated in all directions. So intense was the heat, in fact, that several patches of dry grass began to burn. He wasn’t sure if he could see an occupant moving or not, but Lachasa had a sudden urge to inform the authorities in case there were any survivors.

By the time he arrived at the Leribe Police Department, it was a little after 10:20 pm. Lachasa would speak with the officer on duty that evening, Sargent Thobo. He would state that a “strange aircraft” had crashed on his farm. Furthermore, there could be injured crew. And it was frightening his cattle, so he required the police to remove the metallic ruin.  After several moments Thobo, along with Constable Nandi, would follow Lachasa back to his farm to investigate. Their report would state that a “large round disc-shaped object lay within the boundaries of Mr. Lachasa’s farm”. They would estimate the object was around sixty feet in length and around ten feet high. They would confirm the color to be “dull grey”, while also stating they could see no windows or portholes. Nor could they see anywhere to indicate a point of entry or exit from the mysterious craft.  Despite the ruinous appearance at the scene, the craft itself didn’t appear to the officers to have any significant external damage. Unsure what to do, Thobo would radio into the police switchboard. He would receive orders to return to the station and prepare a report immediately, which he did. Around an hour later, shortly after midnight, an official internal report went from the police to a Lesotho government official. They would authorize a report to go to the South African intelligence department.  It would appear a covert operation to recover the craft was already underway.  NOTE: The above image is CGI.