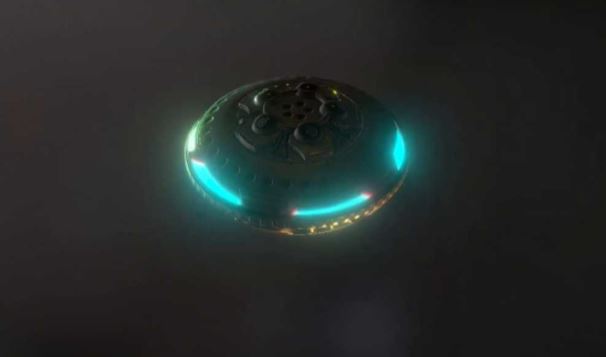 Traditionally, the Center identifies a given sighting by assigning to it the name of the nearest city, or other geographical feature or landmark. It the case of the cluster of sighting reports we received over the Hotline on the evening of March 15, l995, so many states and cities were involved, we are going to borrow a line from Shakespeare regarding the possible perils of that date…

The first call we received was from Cannis City, FL, reporting that two males were walking along railroad tracks near that town and were stunned to see a luminous, white disc-shaped object streak across the sky, pass below or near several aircraft in the night sky, appear to ascend back up into the sky, and disappear to the north. The report seemed to be sincere, and bore several of the hallmarks that the Center knows to be characteristic of legitimate reports. However, it was so much like so many other reports the Hotline receives on a regular basis that we were not yet alerted to the possibility that other reports were soon to follow…

The second call we received minutes later from a gentleman in Jackson, TN, who reported witnessing a blue-green “cloud of light” hovering in the night sky. He had seen it streak from the northwest beneath, he thought, almost solid overcast, hover for approximately 30 or 40 seconds, during which time he could almost see some kind of object apparently imbedded in the cloud of light. The object then began to drift generally to the southwest, the caller reported, at which time it belched out a large “cloud” of sparks, and then streaked southwest, quickly disappearing from sight.

Minutes later, we received a call from a sergeant in the Missouri Highway Patrol communications headquarters in Jefferson City (“Troop F”). The officer had been on duty that night at his station on the east side of Jefferson City, when together with two Jefferson City police officers, he witnessed an intensely bright, green light hover in the sky over Jefferson City for approximately 5-7 seconds. The object began to descend slowly, at which point its color changed to yellow, and then it simply disappeared from sight instantly, like a light being switched off. The patrol officer reported that their “911” emergency dispatch telephone line had taken many reports from citizens regarding the same object, and one caller reported that his cellular phone and radio went dead while the object was near his vehicle.  While I was speaking with the patrol officer, another call came in from a retired commercial airline pilot, who resides in Vienna, VA. He and his wife were driving back to their home in Vienna, just a few miles west of Washington, D.C., after having picked up their daughter at National Airport. Their daughter is an airline pilot for the same airline that her father had flown for, and from which he had retired.  As they were driving west (at a heading of approximately 250 degrees magnetic) on Westford Avenue (?), approaching the exit for Chain Bridge Road, the father and daughter both simultaneously observed an bright object, apparently at some distance from them, streak down out of the sky almost directly ahead of them, descending at approximately 70-80 degrees from the horizontal plane. They both expected to observe some kind of explosion when the object reached ground level, but nothing happened! Rather than explode, the object simply disappeared from sight–uneventfully– when it reached the horizon…

The next call came from Fairmont, WV, perhaps a hundred miles (or more) to the northwest of Vienna, VA. A young woman called to report that, after visiting with her mother in Westover, WV, she had just sat in the driver’s seat of her car to leave, when a bright light had streaked silently over her car at a breath-taking velocity. She added that as she glanced up at the light, she thought she could make out the outline of an “egg-shaped” object imbedded in the orb of bright light. The back portion of the object was bright yellow.  Many other calls were received that night, and over subsequent days, regarding what appears to us to be the same sighting. Thousands (!) of calls reportedly were received by radio stations and “911” facilities in St. Louis, MO, after the object passed over that city, and we received two very convincing call from western Illinois, as well.  In summary, it appears that one or more egg-shaped objects, radiating intensely bright green, blue-green, and yellow light, and periodically spewing out a cloud of sparks, streaked over at least seven states, stopping from time to time, and the whole event occurred in a matter of minutes!!  NOTE: The above image is CGI.