Hi, my name is Michael. I live in Pearland Texas, just on the outskirts of Houston. I had a strange sighting this past October 22nd.  I’ve been looking for an explanation online somewhere but haven’t found anything close to what I saw, maybe you or one of your readers could shed some light on it.  About 8:30 am I was on my way home from dropping a friend off at work, I was turning from Interstate 45 onto Dixie Farm Rd, when I saw what initially looked like a plane, but I just can’t say that’s what it actually was, due to its strange appearance.  It looked like a plane, only it was sort of fat in appearance, its wings were average size, but it had no windows, and I saw no engines. It was dull gray with a single blue stripe along the length of its body.  I figured it had to be a blimp, only there were no tether wires or strings holding it in place. It was perfectly still and unwavering despite it being a very windy overcast day. It was very low to the ground, perhaps the length of three or four cars high. It was perfectly still and above a small mining facility.  To attach something like this to that machinery I’m sure would be dangerous and illegal. It was the same body length as it was high up from the ground (3-4 car lengths). I wanted to take a picture but due to the mining equipment, there is no place to pull over.  I drove about two blocks down, made a u-turn and went back to see it again as it truly was an odd sight, but upon returning, it was gone. I just don’t see how it could disappear in the two minutes it took me to turn around and come back to where it was.  I drove around to see if maybe it had floated off, thinking it had actually been a blimp after all, but it was nowhere to be seen. I’m not ready to say that it was extraterrestrial, but it definitely was a UFO.  I live in between Hobby Airport and NASA so I guess anything is possible. I’m just really curious if anyone else saw it or something similar to it.  NOTE: The above image is a rendering. 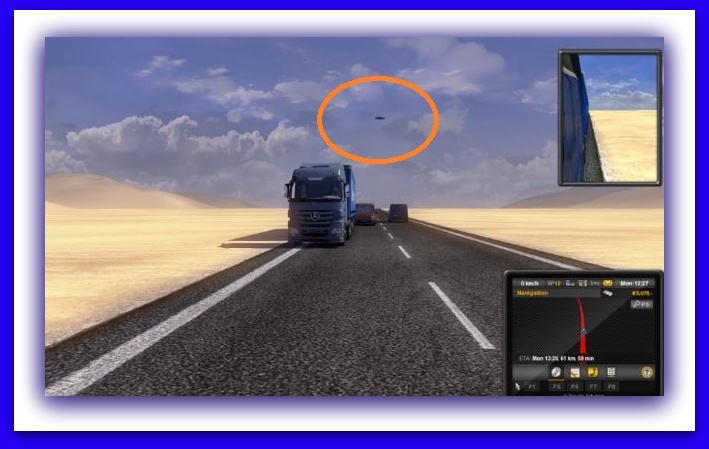 OVERTURNED 18 WHEELER AND UFO IN TEXAS

While driving a truck east bound, on IH 10 near Seguin TX,  I first heard the chatter on the citizens band radio.  I ignored it but they kept talking about these UFOs, strange lights that made a truck crash when the object crossed over the highway at mile marker 599.  Supposedly it was emitting intense heat. I said some not so pleasant words and drove on.  Well at mile marker 614 I saw it through the fog; there were very bright flood lights on the right as I got closer.  I saw the brightest, clearest lights in an approximately 200 foot wide circle with one light missing.  I’m guessing that there was 11 lights in the circle and one in the middle emitting a beam straight to the ground about 15 feet from the roadway.  As I drove under the objects lights at 65 mph I felt intense heat with the A/C blowing in my face. About 100 yards down the road there was another on the left and 100 yards down another on the right and another 100 yards down on the left.  They did not move and made no sound. I have not been a believer in UFOs, but I AM NOW. I have never seen anything like that and I used to live on Dugway Proving Grounds in Utah in the early 80’s, where I saw lots of strange things fly around real fast and then disappear, but meant absolutely nothing to me.  This scared me so badly it has changed my life and the way I see it I will never look into the sky the same way again.  When I got to mile marker 599 there was an 18-wheeler overturned on the westbound side.  I will never doubt again.  NOTE: The above image is a rendering.