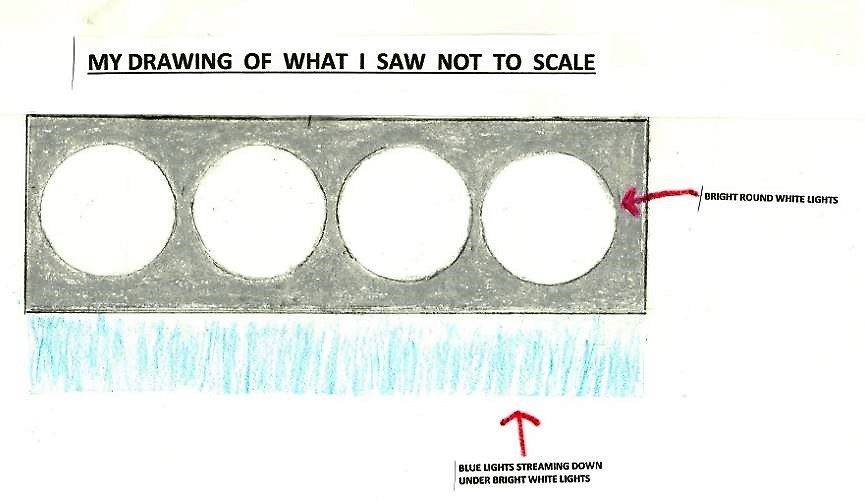 I spotted one object above the Pacific Ocean for a total of approximately 3 minutes, then it was out of my view, as I was driving the opposite direction.  I was driving on Hwy-30 coming from the West of Lahaina, Hawaii, travelling toward the East to Kahului, Hawaii, when I spotted one rectangular object above the Pacific Ocean with solid white running lights across the length of it, and streaming blue lights below the white running lights. The solid white lights were very bright. The streaming blue lights below as if toward the ocean, were the color blue police cars use on top of their vehicles. I spotted it, then it was out of my vision for a few seconds, until I got down from the bypass to the highway and it appeared again. It seemed to be travelling West above the Pacific Ocean. When I got to my destination on the other side of the island, I asked the security guard if anyone coming from Lahaina, Hawaii, reported seeing anything strange in the sky. The security guard told me 4 people mentioned it to him. I am a retired wordprocessor.

Thanks for getting back to me. As far as size, the best I can compare it to is the length of a plane, at least as long as a plane or maybe a bit longer. To me, the big bright round lights I would compare to a round floodlight, probably not as large as the moon, but from far away I compare it to a round floodlight. I hope this helps. When I was looking at the object while driving, I didn’t have to cock my head up high in the sky. It seemed as if I could just look out at the top of my passenger window to see it. Another words, I didn’t have to look straight up into the sky. Hope this helps also as to exactly where it appeared to me in the sky. Also, my astrology teacher got back to me and said no one reported the incident to her, darn. She was really excited about what I saw. Thank you for your help with this exciting object I saw in the night’s sky. Keep up your good work, as I know it takes many, many hours to investigate, but I appreciate what you do Peter.

NOTE; The above image is a  renderings by the witness.

Thanks to Peter Davenport at www.nuforc.org