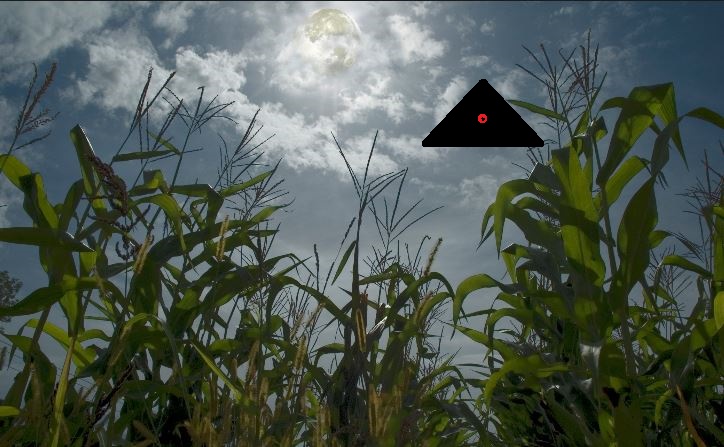 ALIEN TRIANGLE SPOTTED NEAR THE 155TH AIR FORCE WING IN NEBRASKA
.
MARCH 18, 2016……….11.45 PM  …………. LINCOLN NEBRASKA
.
Large triangle shape, defined by a series of dim lights moving silently and fast. South to north over Lincoln, Nebraska.   I was sitting outside at the patio table with my dog sitting next to me. The night was clear, and the stars where bright. I looked down at my dog, her ears were perked up and she was focused on something in the sky off to the south. Very strange to see her follow what ever it was until she was looking straight up. This caught my attention because it’s strange for Dogs, or cats to follow flying objects like airplanes, and helicopters. I followed my dogs gaze, and directly over me I saw a series of dim lights that clearly defined a huge Triangle, and it was moving North very quietly and very fast. There were no red or green identifiers or strobes. The lights did not appear to be on the outside of the object, but more like the dim light you would expect coming from windows. My sense was that its altitude was in the hundreds not the thousands because there was a halo effect around the lights due to the moist air. The Object was perfectly silent.  From the time I noticed my dogs ears perk up to the time it vanished off to the north…6 seconds at the most.   NOTE: The above image is CGI.

A World War II Army Airfield, a Cold War naval air station, and later a United States Air Force installation under the Strategic Air Command (SAC), most of the original airfield and base is now owned by the City of Lincoln, Nebraska. It is used for general, commercial, and military aviation activities, as well as a colocated industrial park and public and private housing. Lincoln Airport, established in 1960, was built on the east side of the former Lincoln Air Force Base main runway. With the closure of Lincoln Air Force Base in 1966, the City of Lincoln assumed possession of those airfield facilities of the former military base not retained by the Nebraska Air National Guard or the Nebraska Army National Guard.  The current facility is home to the Nebraska Air National Guard‘s 155th Air Refueling Wing (155 ARW), an Air Mobility Command (AMC)-gained Air National Guard unit flying the KC-135R Stratotanker. The 155 ARW is the nation’s second oldest Air National Guard unit, being offered federal recognition on 26 July 1946 as the 173rd Fighter Squadron. It operates from a new facility built on the southeast side of the main runway. The 155th Air Refueling Wing is commanded by Colonel Keith Schell.