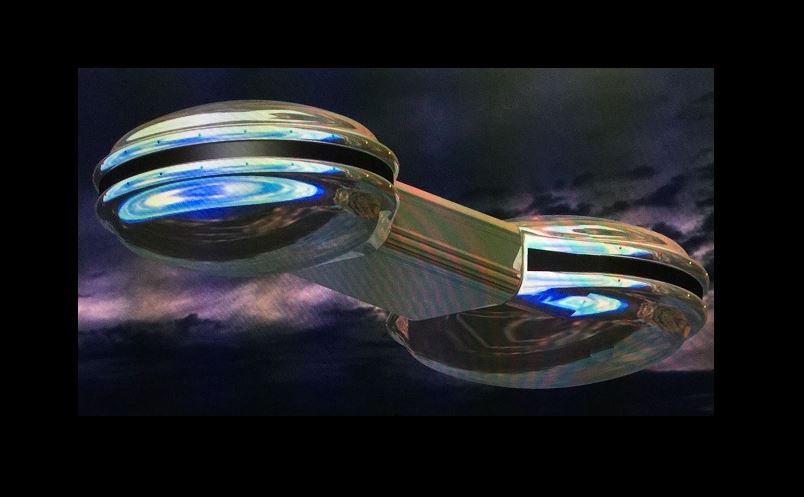 BARBELL STYLE ALIEN CRAFT ENCOUNTER IN SAN DIEGO
.
FEBURARY 20, 2016   …………. SAN DIEGO CALIFORNIA
.
It was on Feb 20, 2016 that the sighting occurred. It was the day the weather was going to change; a storm was rolling in from the west to end our summer weather week (in winter). It was in the early afternoon and my wife and I were sitting outside enjoying the view. Our deck faces the NE. NNE from our view points to Gavilan Mtn, Fallbrook, CA, which we have a clear view of. The cloud front was just coming over us like a sea of grey and seemed to head in an ENE direction. The leading edge of the clouds stretched out as far as we could see and appeared to be somewhat puffy and white with some holes that allowed you to see some blue sky behind them. There was a lower layer of a few thinner, stretched out clouds that you could see through that seemed to move in either an E or W direction, I don’t remember which, but I do remember it was at about a 30 degree angle to the direction of the storm front. I’d guess the layers were 100-300 feet apart. The biggest cloud of the lower layer intersected with the storm front and blue sky and that point appeared to be right over the top of Gavilan and maybe 1,000 above it. I had just made a sandwich, which was pretty messy. I was pretty hungry so I was eating it as I came out of the kitchen over to our outdoor sitting area. I was looking up at the sky in the area of where the two clouds met when something glimmered behind the leading edge of the storm clouds. I thought it was a plane above and behind the clouds that must have reflected the sunlight. But I couldn’t see any object yet, although it still seemed to shine. Then the object appeared to drift down below the storm layer, actually swinging like a pendulum in a grandfather clock. It was a very shiny/brilliant object, almost with a glow, and now I could make it out. It looked like a polished, whitish shiny barbell except the lower end of the “barbell”, or bell if you would, was dark and burnt looking. That end appeared to be behaving like parachuter would, dangling and swinging back and forth, and that was my first thought. Odd though, both ends were relatively the same size which wouldn’t be the case with a parachute.
.
A parachute would have a much larger “chute” to carry the lower “bell”. At this time I glimpse a small plane maybe ¼ mile to the right of the object and I thought it must have come from that plane. Then I realized the object was too high up to be associated with it. I still thought, since it was sort of floating down rather slowly, that either it would continue down and crash or the chute would have to open soon. Either way I knew this wasn’t going anywhere for a while so I thought I’d put my sandwich down and grab my binoculars from the table behind me to check it out. So I turned around, put my sandwich on the coffee table, picked up the binoculars and turned around and it was gone. I looked for hours and could never find a trace of it again. The bar bell appeared to be 20-30 ft in diam. The “bar” appeared rectangular and shaded and was 8-12 ft rectangle maybe 30 – 40 ft long. The other dangling bell appeared dark, almost burnt, and actually looked like a square close to being 15 – 25 ft cube. The area over Gavilan Mtn is not an area for parachuters and, although Temecula often has balloonist, we have seen the balloonists much further off in the distance. I’m an engineer and I’ve worked for Navy and I know this was not anything we have or will ever have. Yesterday I read MUFON Case 74282. When I saw the CGI they have created representing what these men saw, I felt immediately that this IS THE SAME craft I saw several weeks earlier. I have included a jpg which I’ve cropped from the MUFON file. The only difference I can immediately see from what I saw and the CGI is the dark edges in the CGI. However, when I viewed the object I saw it from an angle that made the darker edges unremarkable and one of the “bells” was black and square. I’m an engineer and worked for the Navy on several military aircraft. I’ve seen enough to know this wasn’t any aircraft, swamp gas or anything normal. This was in broad daylight, close and large enough for me to identify, and high up enough in the sky for me to know that it should have still been there when I turned around.  NOTE: The above image is a rendering.
.
KENS NOTE:  Naval Base San Diego, sometimes called 32nd Street Naval Station, is one of the largest bases of the United States Navy and is located in San Diego, California. Naval Base San Diego is the principal homeport of the Pacific Fleet, consisting of 50 ships and over 120 tenant commands. The base is composed of 13 piers stretched over 977 acres (3.95 km2) of land and 326 acres (1.32 km2) of water. The total on base population is 20,000 military personnel and 6,000 civilians.
.
KEN PFEIFER WORLD UFO PHOTOS AND NEWS
WWW.WORLDUFOPHOTOSANDNEWS.ORG
WWW.WORLDUFOPHOTOS.ORG
THANKS TO WW.MUFON.COM CASE FILES
.
.