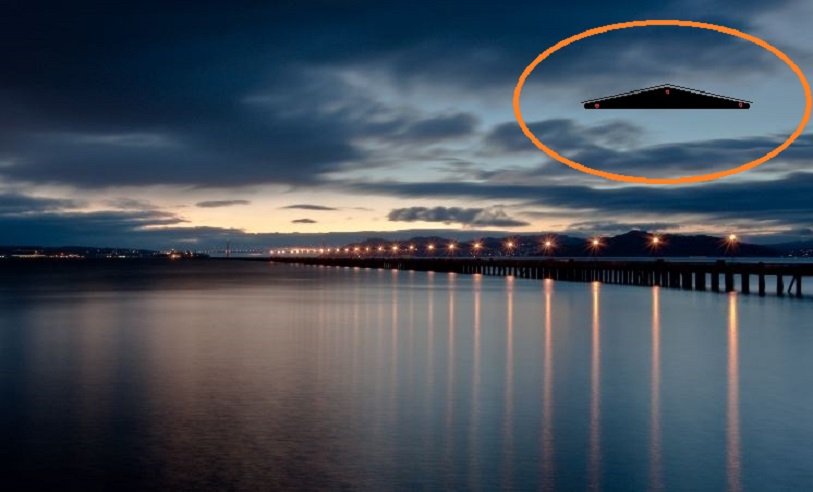 TRIANGLE CLOSE ENCOUNTER IN EDGEWATER MARYLAND
.
JUNE 29, 2016 ……………….  EDGEWATER MARYLAND
.
The sighting happened a few miles south of Annapolis, MD on the early morning hours of Wednesday June 29th 2016. I had taken a vacation to Ocean city, MD on Monday the 27th of June and left to go back home Tuesday night around 11PM. I pulled over in a shopping center to text my girlfriend that I was just going thru Annapolis and was halfway home. That was at 12:54AM. I got back on the road to head south on route 2, and when I got past the town of Edgewater I saw a very bright light in the sky. I at first thought it was a planet shining brightly in the night sky, but looked more like a forward facing search light with some smaller lights around it. I kept watching it as I drove south towards Calvert county, MD. The light was very low in the sky and I kept losing it behind the tree line, but when I got closer to the light I saw two glowing balls of light come out of the bottom, drop down and fly off. It looked like another ball of light started to drop from the craft but I started driving downhill and the trees covered the craft again. I kept getting closer to the craft until I got directly under it. I pulled off the road to look and it didn’t make a noise and was only about 500 feet in the air. I grabbed my cell phone to take a picture and when I did the craft took off at a high rate of speed, still making no noise at all as it went. I turned my truck around and tried following it for a couple minutes, but it was way to fast. From the bottom the craft looked like a triangle with a large searchlight at the front and to small lights at the corners facing down. It looked to be about 50-75 feet across and just hovered until one tried getting a picture of it. I have lived near the Patuxent River Naval Air Station my entire life, where they test aircraft, and I can identify planes and helicopters, as the fly over my house every day all day and night. I have never seen a craft like that before, so low and so quiet. Approximate location of where I stopped to see the craft above me.   NOTE: The above image is CGI.
.
KEN PFEIFER WORLD UFO PHOTOS AND NEWS
WWW.WORLDUFOPHOTOSANDNEWS.ORG
WWW.WORLDUFOPHOTOS.ORG
THANKS TO WWW.MUFON.COM  CASE FILES
.
.