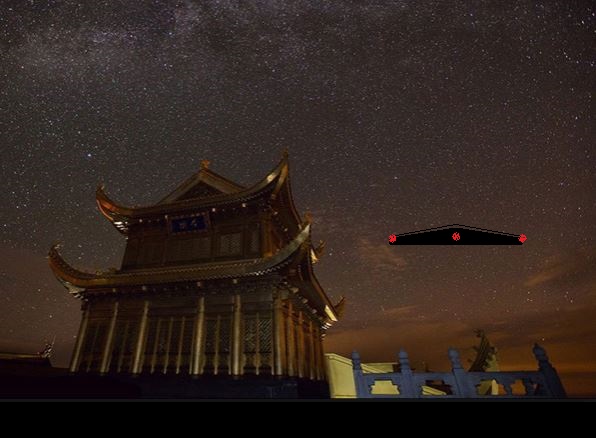 This changes everything I’ve always been a skeptic, until this day. We are not alone and I am now 100% certain about this. A very unsettling event, here it goes; 12 May 2016 @ 2300 (Shanghai, China) My wife and I went out in the evening to walk our dog and headed to a newly built public park about 2 km west of the HongQiao airport. It was a great and comfortable evening with a clear night sky with temperature ranging between 20-22degree Celsius. We actually walked quite a while during that evening and so needed to take a rest somewhere to cool down our dog. So we headed to a bridge structure in the middle of the park. My wife sat on the bridge, the dog lied down resting, and I lied down flat on my back, looking up in the sky. I personally like looking at stars during a clear night sky so whenever I get a chance, I take it and simply lie down flat on my back like this and look up; make wishes, say hi to my long-gone love ones, etc. Weird behavior I agree but there you go – that’s me! It’s at this moment that I’ve spotted this V-shaped (triangular) craft with 7 amber color lights on it. The craft was heading north and was traveling way above supersonic speed. Certainly faster than anything else I’ve seen flying before (e.g commercial or military fighter jets).

I’d say about twice faster if not more. As it passed in a straight line right above us, and 3-4secs later, you could only see the two lights from its tail and it instantly disappeared. No sounds whatsoever, completely silent. When I first saw the craft I instantly sat down and pointed the sky with my finger and shouted ‘ufo ufo ufo’ to my wife (it doesn’t take long to figure out what’s happening when you see such a distinctive shape in the sky, 1 second, literally). All happened very fast however. As I was pointing up and shouting ufo with a breathless little girl tone, my wife tough I was pulling a silly joke on her so it took her quite a while to finally look up. Took her about 2 secs to realize I was NOT joking and then looked up. She unfortunately missed it but reported seeing a strange formation of clouds where the craft passed – where I was pointing with my finger in the sky. She also reported that the clouds she seen forming disappeared gradually but rapidly. V-shape craft description Color: It all happened very fast so I had literally 3-4 secs to process what I was seeing. The craft was the same color of the sky on that evening – possibly reflecting off the yellow’ish ground lighting of the Hongqiao district. It was certainly not transparent as I could see its very distinctive v-shape. I was slightly gray’er than the background night scene. Size: Hard for me to judge its size with no reference nearby. The only thing that was up there were stars and those aren’t much of a reference for sizing. I can’t even say for sure what altitude this thing was flying at. I could see some of the details clearly so it had to be more or less 2000meter above us. Like I said, all happened very fast so this part is rather missing. From my angle, and judging from other commercial aircrafts flying during that same evening, it was certainly 3 to 4 times bigger than the size of a regular 747 jet plane. 7 lights: 7 or 9 lights, I am not 100% sure. Certainly had one on its nose and one on each side of its tail with 2 (or 3) on the each side of the craft itself. Those were clearly solid amber color now that I am 100% sure. Amber as between yellow and red. Not flashing, not pulsing, just plain simple amber dots evenly distributed around it.

Traveling Speed: Faster than anything else I’ve seen before. Much slower than a shooting star but much faster than a fighter jet flying at sub/supersonic speed. I’d say twice faster than a military jet and yes, I’ve seen quite a few fighter jets shows during my younger years so I can make this judgement quite easily. And that’s it really. That’s all I have really. Like I said it all happened quite fast but I’ve seen just enough to get me to sweat quite a lot, I was nervous, trying to pull jokes at the same time (come and get me I’ve shouted on that bridge lolll), I was not panicking but certainly wasn’t well. It really hit me when I got home and pulled up google image (keyword “triangular shape ufo”). Many of the pictures from other ppl who witness similar flying objects really hit hard on me. Didn’t like the feeling at-all. We are NOT ALONE :/ Ps. We stayed on-site a few minutes after the sighting hoping to see a reaction from the Chinese military. Nothing happened. Commercial flights were doing their thing roaming the sky as usual, etc. No jets scrambling, nothing at all. Very strange. Either the Chinese are used to these visits, as-in they happen daily, or their radars simply weren’t aware of the craft. One thing for sure, there was many commercial jets flying on that evening, at the same time, so someone, somewhere must have seen it as clear as I did. Can’t wait to hear.  NOTE: The above image is CGI