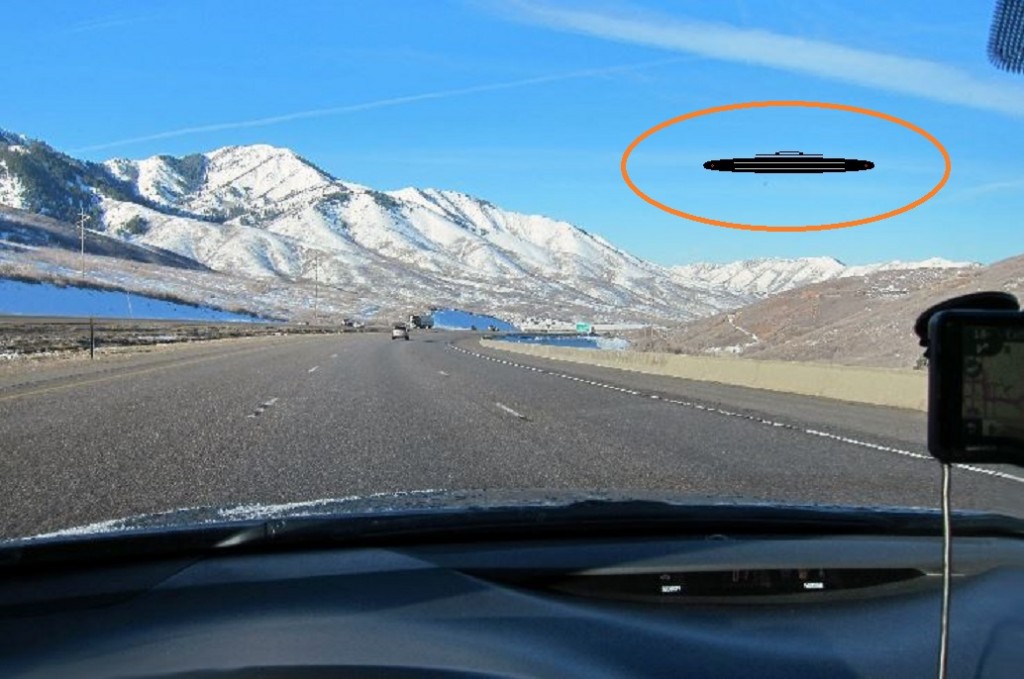 AFTERNOON ALIEN CRAFT SIGHTINGS IN UTAH
.
JULY 13, 2016 ………….  MAGNA UTAH
.
At about 2:45 pm, time approximated. I know it was after 2:30 and not yet three o’clock. I saw a shiny cylinder or possible disk?  Bright and sunny day as you know if you are in the valley area today.  I watched it as I’m driving.  I’m on 4000 west and about 4400 south when I first saw it.  It just stood out as odd to me. It was moving very slow in a southwest direction. I looked and looked and could not see a tail fin.  It looked wider, longer than a commercial jet.  Silver white with sunlight reflecting off it and at times a hint of grey. Moving in a vehicle it almost appeared not to be moving.  I stop at a signal light and watch to see it better.  It is slowly moving.  The leading side seemed to be tilted down slightly in the direction it went. The flight appeared very level and steady.  While stopped at the signal light…. I saw it change direction and the size of its shape did not change at all. This made me think it was a disk shape.  Direction change and it still appears to be the same shape. (Direction change from southwest to a western heading) At the stop light I can see it with the view of telephone poles and wires to easily judge it movement against a clear blue sky. After the change of direction and not before or during…. after the direction change I saw it tilt on a near 45-degree angle and is barely moving. It appears to be heading more west now. The light changes so I take off and drive into a Smiths grocery store parking lot. I’m watching it as best I can driving, it is slow moving. I took my eyes and peripheral vision off it as I turned in the parking lot. Then I don’t see it again. I drove straight to a parking spot which took seconds. I hurried out of the truck to look for the object. I don’t see it. I looked and looked. I tried to guess by speed and direction where it might be etc. I never saw it again. No jets or anything either. I sense some people looking at me as to why I’m staring at the sky so long. Weird looks from people wondering what I’m looking for in the sky, ignore them. No one spoke to me as to why. I carefully scan the whole sky in the direction it was heading etc. So then I scan to look carefully all around, the whole sky again and again. I even look where I think it could not have gone even at a speed of a jet. I was very careful to look intently and not to overlook any section of the sky. I never saw it again. It had been moving slow when I last saw it. It was not even half way across the Salt Lake valley heading southwest when I was driving into the parking lot. If it was a jet, there was no way it could have gone from sight in that length of time I took my eyes from it to park. The whole time I saw it, the object was moving too slow for a jet. It was a 1/8 longer, wider than a commercial jet from nose to tip. It was about as thick as the body of a jet. I went to the store and buy tomatoes and milk. I come back out in the parking lot. I watched long enough to see a few jets near the same distance the object was. I could easily see they have a tail fin. What I saw I could never see a tail fin on it. No tail fin and the fact it just seemed to disappear made me feel it had to have been a UFO. I would feel better if I had a chance to view it with binoculars and know where it went. To see no tail fin, I can accept. How it was not to be found again in a few seconds of taking my eyes off it. That was the main alarming thing to me. That I could not explain away.  NOTE: The above image is CGI.
.
KEN PFEIFER WORLD UFO PHOTOS AND NEWS
WWW.WORLDUFOPHOTOS.ORG
WWW.WORLDUFOPHOTOSANDNEWS.ORG
THANKS TO WWW.MUFON.COM
.
.