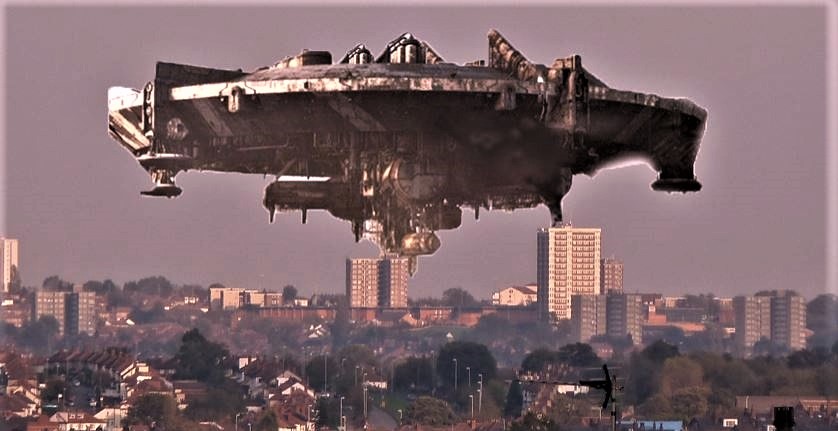 Caller reported the following:
The caller reported that at 2208 hrs. (eastern), she was riding the Staten Island Ferry from the tip of Manhattan to Staten Island. Just as the ferry was passing Governor’s Island, she became aware of a commotion on the east side of the ferry boat. People were rushing to that side of the ferry, shouting, pointing, and generally raising a ruckus.  She decided to try to determine was the cause of the disturbance, and walked outside onto the passenger deck. What she saw shocked her. The object was huge, and it obscured the passengers’ view of Governor’s Island. Many of them reported that the object looked like a city, with lights and a skyline. However, its presence apparently roiled the water beneath it, causing a froth to appear on the water’s surface!!  For days afterward, the witness handed out leaflets at the ferry terminal, hoping to contact other passengers who had seen the object. Those same people approached 9-1-1 facilities, requesting copies of the tape recorded reports of the object, which was also seen from Governor’s Island, but the tapes were either missing, or not made available, they were told.  This incident apparently was VERY dramatic, and it was witnessed by dozens, or perhaps hundreds, of people. – NUFORC  NOTE: A senior medical care executive called to discuss events re 09/15/95 sighting in NYC harbor. Many other responsible witnesses found, according to NUFORC.

In the F.Y.I. section of the New York Times, dated October 24, 1999, the following information was published in reference to to a reader question “Have there been any major U.F.O. sightings around New York City in recent years?”:  According to Mr. (Peter) Davenport (NUFORC), the first occurred aboard the Staten Island Ferry on Sept. 15, just after 10 P.M. As the ferry passed Governors Island, he said, people began rushing to the port side, entranced by an object to the left, between the ferry and the island. Sylvia Mok, a Wall Street proxy manager, said she was aboard the ferry that night, and saw a blazing white light shining through the window. ”At first I thought we were passing too close to a big ocean liner, so I went outside to see,” she said. ”I look up and there’s a city floating on the sea. There is no movement of water. The city was laid out in blocks, and had buildings at one end, lit up. But no one was there. There was something insubstantial about it. It appeared to be more of a…whirling shape.”  Ms. Mok said 75 to 100 others watched the ethereal floating city from the upper deck, but only a handful of fellow passengers were willing to corroborate her account later. “Within 24 hours, doors started slamming in my face,” she said.  NOTE: The above image is CGI.