At 9:00 am on January 19, 1966, a calm sunny day, a 28 year old banana farmer named George Pedley was driving a tractor near Horseshoe Lagoon on the property of Albert Pennisi, near Tully, in tropical far north Queensland, Australia. When he was about 25 yards from the lagoon, he heard a loud hissing sound above the noise of the tractor.

Suddenly, an object rose out of the swamp. When I glanced at it, it was already 30 feet above the ground, and at about tree-top level. It was a large, grey, saucer-shaped object, convex on the top and bottom and measured some 25 feet across and 9 feet high.

While I watched, it rose another 30 feet, spinning very fast, then it made a shallow dive and took off with tremendous speed. Climbing at an angle of 45 degrees it disappeared within seconds in a south-westerly direction…

Another surprise came when Pedley rounded the bend of the road and came to the spot from which the object had risen. There in the lagoon was a large circular area that was clear of reeds and in which the water was rotating slowly. It had not been like that three hours earlier when he had passed the lagoon. After looking around, he got back on the tractor and left.

A few hours later, at about noon, Pedley returned to the lagoon for a second look. The scene had changed, because now the circular area was covered by a floating mass of green reeds that were distributed in a clockwise radial pattern. The circular mass of reeds was about 30 feet in diameter.

Pedley was by now excited enough about what he was seeing to go and tell Albert Pennisi, the owner of the sugar cane farm land on which the lagoon was located, and another friend. Pennesi recalled that his dog had acted strangely that morning, barking madly and heading off toward the lagoon at about 5:30 am.

Pennisi and the other man were amazed by the circular mass of reeds. Wading out to the mass, they found that they could swim under the mass of reeds and that the lagoon floor beneath it was smooth and showed no traces of roots.

Oddly, the outside edges of the mass of reeds angled down, similar to the shape of a saucer placed face down. Pennisi went and got his camera and took photographs of the mass of reeds, which was now beginning to turn brown on its top surface. George Pedley reported his experience to the Tully police that evening, and they in turn reported it to the RAAF after making a trip to the site the next day, January 20.

Within days, the media had picked up the event and the area was filled with investigators, many of whom were trying to prove theories as to the cause of the “nest” such as helicopters, big birds, crocodiles, reed-eating grubs, and whirlwinds of one sort or another. Pedley’s UFO sighting was all but overlooked in the flurry of explanations.

During the course of the investigations, as many as five other “nests”, all smaller than the original, were discovered. In some of these, the reeds were rotated in a counter-clockwise direction and a couple of them showed signs of burning in the center of the nest. Samples of the original nest were sent to Brisbane for analysis, but nothing unusual was detected. Other than being part of the “nest”, the only unusual thing about the reeds was that they turned brown in about 8 hours, whereas reeds uprooted by hand in the lagoon took three days to turn brown.

In another unusual twist, Albert Pennisi told a reporter from the Sydney, Australia newspaper The Sun that he had been dreaming about a UFO landing on his property for a week:

I’d get them almost every night. And they were beginning to worry me. I couldn’t understand them. It was always the same. This thing like a giant dish would come out of nowhere and land nearby.

And I would watch it in my dream and get real afraid before it went away. Then on Wednesday morning about 5 o’clock my dog suddenly seemed to go out of its mind. It was howling like a mad thing and raced off towards the lagoon.

What happened at Horseshoe Lagoon? There was never any evidence that there were any helicopters in the area nor any demonstrated reason for one to be over the lagoon. There was no evidence that crocodiles made the nest and analysis of the reeds from the nest showed no trace of “reed-eating grubs.” There was no known bird that would or could make such a nest in three hours.

The best explanation that the RAAF could offer was that the nest was created by a willy willy, a type of small whirlwind known to occur in the area.

Although a conclusive determination could not be made, the most probable explatation was that the sighting was of a “willy willy” or circular wind phenomenon which flattened the reeds and sucked up debris to a height of about 30 feet, thus forming what appeared to be a “flying saucer”, before moving off and dissipating.

Hissing noises are known to be associated with “willy willies” and the theory is also substantiated by the clockwise configuration of the depression.

However, such whirlwinds, except when they occur in the desert as dust devils, normally accompany thunderstorms, and although the Tully event occurred during the rainy season, January 19 was a sunny day with little or no wind. Pedley described what he saw as a blue-grey object shaped like two saucers face to face.

This description doesn’t sound like a whirling mass of swamp debris, and there was no fallen debris in the area where the dissipation would have occurred. Finally, how does the whirlwind explanation account for the fact that the water was clear when Pedley looked the first time, yet was covered by the mass of reeds when he looked again three hours later? NOTE ; The above image us CGI.

KENS NOTE: Of course the RAAF would try to debunk the encounter with an alien craft. That was their job, in the sixties, just like the american military. The goverment did not want the public to know the truth because it would cause panic and make the goverment’s look inadequate. 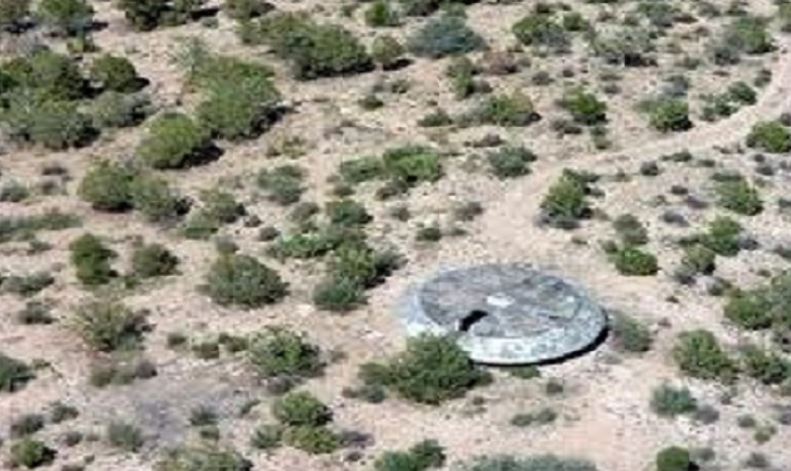