The sighting occurred on Monday May 14, 2007 in the German city of Kelsterbach between 1:00 AM and 1:50 AM. Two friends (Identity hidden by request) saw a boomerang shaped flying object in the clear night sky which was flying very low over one of the witnesses yard. The other fiend saw it first and initially it appeared to be a very fast moving cloud. It uncloaked itself and initially it appeared to be transparent. Then hw was able to see some small lights on the bottom (which by that time were turned on). He was able to see whole ship, it appeared to be of a silvery color with a strong reflecting effect like a mirror, it looked heavily polished.  In a blink of an eye the craft re-cloaked and turned into a “cloud” again, but then instantly reappeared! By that time one of the friends informed the other one what was going on since Initially he was looking in a different direction. The ship seemed to reappeared in the skies near the “Great Dipper” star constellation. There was not a single cloud that night; so this thing certainly caught their attention. There was a church tower near by so they figured that the object was flying quite low (approx. 82 feet/25 meters). This aircraft uncloaked in front of their eyes, and as soon as it had passed the Great Dipper it cloaked again and disappeared. It had an orange glow at the front, some sort of dome at the rear and some sort of lights (which were turned off) and the bottom. They were able to see this object in full detail. The ship’s body and its dome were silver in color. The big lights at the bottom appeared to be tinted, the small lights described above where not visible any longer because they seems to be turned off at the end of the sighting. The estimate craft’s wingspan was the size of at least three or four Airbus A380 Airplanes put together. The sighting didn’t last long, maybe a couple of minutes and a few seconds. 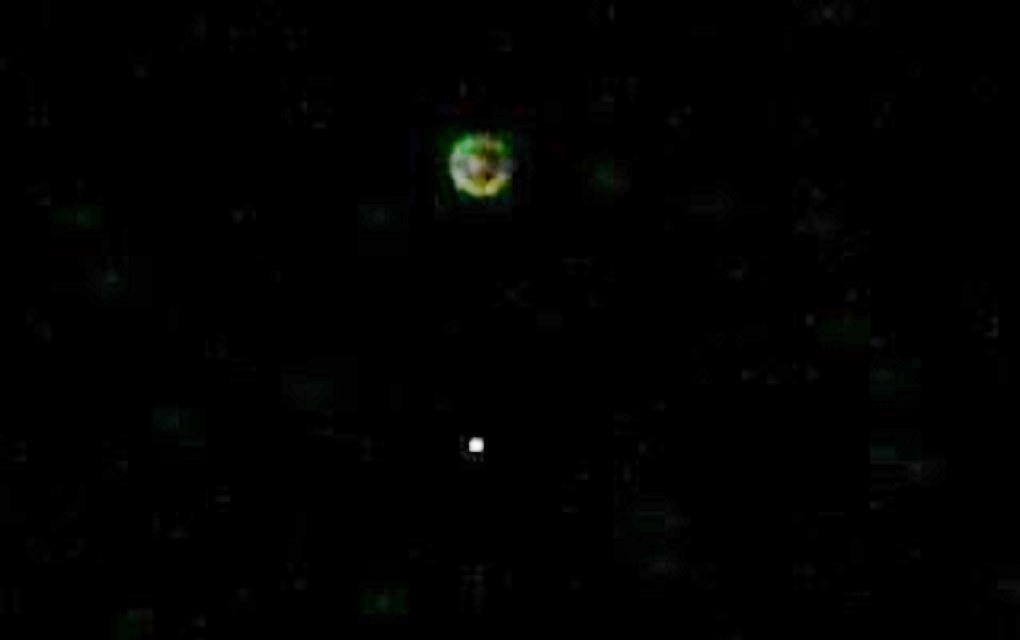 Madeira island  is located about 500 miles west of Morocco. On May 22 nd 2008 at about 21.57 pm local time my wife and I witnessed a strange light which at first  I thought was an extremely bright star.  I had just walked out onto our balcony, I then realized that it was moving in relation to the stars in the sky .I then thought it must be a shooting star and expected it crash in to the atmosphere ,which did not occur. By this time my wife got the camera and managed to take two pictures before it disappeared from view over the apartment, heading northeast almost directly above us. The sighting lasted about 3 minutes. Unfortunately we are not great photographers, the images are not great but left us quite surprised and confused at what they revealed .  In them both appears a star and the object, they were taken a few seconds apart.

Carlos took off, nevertheless, at 10:30, without having his breakfast. He climbed his little plane to 13,500 feet but conditions were still bad so he climbed to 14,500 where he found a clear blue sky and continued on his return trip to Mexico City.  Arriving in the area of Tequesquitengo, Carlos decided to lose altitude in order to make visual contact with Lake Tequesquitengo and verify his position, instead of depending on his instruments. When he got down underneath the cloud cover, ground mist and fog blocked his view of the Lake. Then things began to happen.  When he looked from the left (he had been gazing through his left side window) to the front he became aware of something on his right and glanced in that direction and was shocked to see an object with the appearance of two plates joined together at the rim with a cupola which had what seemed to be a little window and an antenna on top. It was positioned 20 centimeters above the surface of the wing and about 1 1/2 meters from the Piper’s cabin. (See drawing by Staff Artist Robert Gonzales.) A glance back to the left revealed another object of the same description in the same position above the left wing.

Center Mexico: Take note extra alfa union, give me your position and your situation. We are contacting competent authorities and (here interrupted by Carlos again)

Carlos: The aircraft is out of control.

At this point, Mexico City International Airport closed its runways to traffic and prepared for the expected emergency landing. The objects continued maintaining position on XB-XAU, exerting complete control over the aircraft.  The “Mayday” or emergency call was received at 12:15 p.m. on Saturday, May 3. The control tower contacted Ignacio Silva la Mora (Carlo’s uncle), an authority on aircraft, who was put in touch with Carlos via radio to analyze the problem and help with landing preparations.  When Carlos had reached the Ajusco navigational fix, the UFOs had elevated the aircraft from 15,000 feet (the altitude while over Tequesquitengo) to 15,800 and then, one by one, they left. First the object over his left wing elevated until it was over the cabin, then above the object on the right wing, and then these two flew off and were lost to view in the direction of the Popocatepetl and Iztaccihuatal volcanoes. The controls of the aircraft were immediately normal and Carlos regained control.  Carlos then attempted to lower the landing gear, circling Mexico City International Airport eight times, in radio contact to ascertain if he was successful. Finally, after 40 minutes of circling while he worked on the control column with a screw driver, he managed to lower the wheels and landed at 1:34 p.m. on the grassy area between runway 5 right and 5 left where emergency vehicles, including firemen and ambulance, were waiting.   After landing, Carlos was taken to the Airport Clinic where he was thoroughly examined and found to be normal and fit.  NOTE: The above image is the witness drawing.

MILITARY JETS BUZZED BY AN ALIEN CRAFT OVER DELAWARE

My son, his wife and I were in Bethany Beach on November 6, 2016 at 11:10am. The sky was crystal clear blue.  We observed 3 military planes flying east at about 25 thousand ft. about a mile apart heading out over the Atlantic ocean with long contrails.  We were talking about how clear we could see the aircraft. All of a sudden out of the northeast we saw a bright, silver acorn-shaped object approach the middle aircraft.  It flew over the top and at the same speed as the aircraft for about 4 seconds, then shot off at a high rate of speed to the southwest and disappeared.  We looked at each other saying, “what was that?” We concluded we just saw a UFO. We were beside ourselves! We concluded we just saw a UFO.  What we saw was real and very clear! I called Dover air force base. They said it wasn’t their jurisdiction and to call Philadelphia international airport.  We called them. They listened and said to call Dover air force base. No one wanted to talk about it, Strange.  NOTE: The above image is a rendering.

THANKS TO HTTP://WWW.UFOCASEBOOK.COM CASE FILES