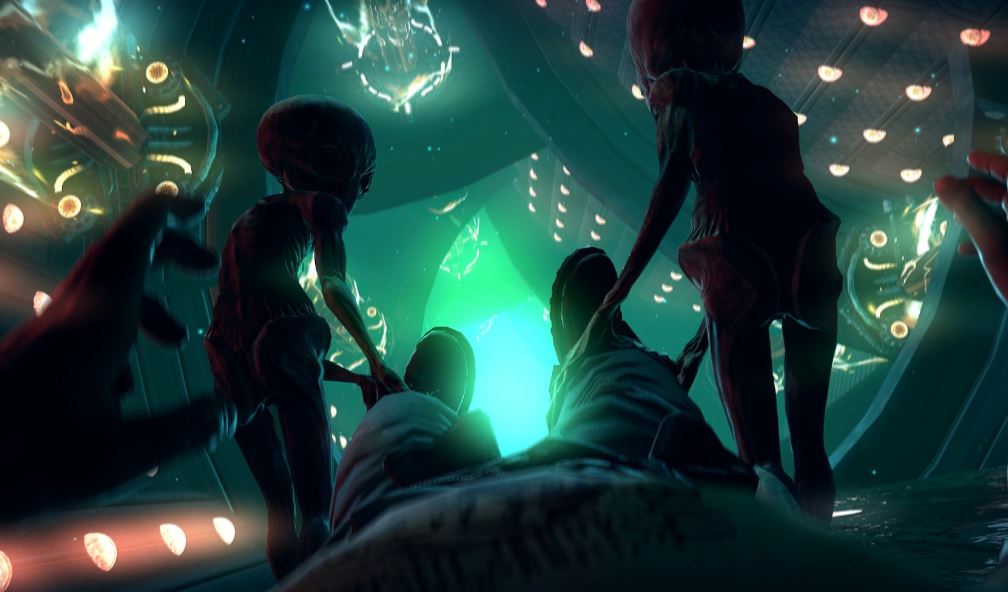 The following incident happened in the winter of 2004. I was living in Reston, WA at that time and was driving home from work at night. I turned off the Valley Freeway and started up Petrovitsky Road, passing Valley General Hospital at around 11:30 PM. I approached the crest of a small hill, looked ahead and saw an object in the air.  It was a horizontal ring of red and blue lights, flashing from left to right in some type of sequence. It was about 75 to 100 ft in diameter and hovered above a grove of trees at the southeast corner of the intersection. I slowed down and drove on for about 30 seconds at the same time looking at the lights. When I reached the intersection, I turned left which put the UFO behind me. I continued to drive a short way turned left into the parking lot of my apartment building. I parked her car and looked toward the object. It was gone…but I then looked to the left and saw another UFO. It was a cluster of red and blue lights, about 25ft in diameter. It hovered about 100 to 150 feet off the ground, across the street about 200 feet from the car. I thought, “If it moves or drops, I’m getting out of here.” Then it began to move dropping in a falling leaf motion (back and forth) to an altitude of about 20 to 50 ft. It stopped and started coming toward me.  Terribly frightened, I got out of the car and rushed to my front door. I noticed my headlights were still on…so I ran back to the car, closed the door and turned off the lights. After that, I only remember that after turning off the headlights, I left the car and ran for the front door about 75 feet away. When I reached it, the UFO was gone.  This incident left a deep and disturbing impression on me for over a year until I decided to seek professional help. I underwent a series of regressive hypnosis sessions in which I revealed (as recorded) that as I sat in the car it suddenly was filled with a bright white light. The next thing I knew, I was standing in a dome-like room, about 15 ft wide, with white, very smooth floors, walls and ceilings. An arched doorway was in front of me as well as a desk-sized white box with a huge number of colored lights on a dark field. A long white table perched on a single pedestal was also behind me.

I stood there calm, but kind of bewildered and absently reached to unbutton the collar of my dress. The next thing I knew, the garment was at my feet. Two beings came through the door. They were about 4 1/2 to 5 ft tall with thin upper bodies, long, sloping shoulders. They seemed unable to straighten their arms completely. They had four, rather short fingers and their heads were large and long. They had round eyes and their noses were very thin. Overall, their faces looked human though they had no hair. They were dressed from neck to toe in blue and purple metallic fabric with high, thick collars. On the upper left chest of their uniforms there was a small insignia, a triangle inside a white circle that seemed to glow.  They grasped me by the upper arms and guided me to the table. I wasn’t frightened as the aliens gently pushed me down on the table. I sensed a third person in the room. He was like the other two, but wore a red orange uniform with a black stripe around the neckline. He put a long silver object to my eyes and then placed the other end on my abdomen. He then moved it around a bit, removed it and then left. He came back a short time later and the three beings stood around the table. “What is the purpose of this?” I thought. “You are progressing physically and mentally as planned and are very receptive to us,” they responded by telepathy because I don’t remember hearing voices. They added that they were “pleased with my training…it was time for me to leave”. I didn’t want to go, but they assisted me off the table. I put my dress on, then they said, “You will see us again” and the next thing I knew I was back in my car.  In October 2007, I was diagnosed with stomach cancer which had spread into my liver. I was given only a few months to survive. I wondered if maybe these beings were actually angels who had warned me that I would see them after I passed away.  The day before Thanksgiving, I was feeling very ill and decided to stay in bed. I knew I didn’t have much time left to live and the pain was getting unbearable. As well, I hadn’t been able to sleep for days. I darken the room with heavy window shades hoping that I could relax enough to sleep.    As I lay on the bed looking at the ceiling of my bedroom, staring at a small spot of light that had seeped through the curtains. I continued to look at the light when suddenly the entire room started to glow with a very bright white light as well as a low humming sound. I tried to sit up but was unable to move…though I still felt the constant pain in my abdomen. I closed my eyes thinking I was dreaming. After a few seconds the sound stopped, so I opened my eyes…the room was again dark, but then I heard that familiar voice in my mind “we have come back as promised…have hope. Rise so you may train your own kind”. I got out of bed and had no pain whatsoever. In fact, I really felt wonderful and enjoyed my Thanksgiving holiday.  A few days later, I was in the hospital for a scheduled CT scan. I was feeling remarkably well and told my physician that I had no pain for several days. After a few hours of waiting for the results, I was starting to worry because it never took this long to get results previously. After a while, I was called into the physician’s office for consultation…he seemed perplexed. “You are in remission and it actually looks like the tumors are decreasing in size”. This was totally unexpected.  To make a long story short, I have been in remission since that time and the tumors are no longer there. There was one tumor that needed to be removed surgically, but the others simply vanished. I am sure it was the result of that “visit”. But I still wonder what “training’ I received and who I will be “training”. It’s obvious that my life was saved for a specific purpose.

KENS NOTE:  The above image is a rendering.  This is the first abduction experience that turns out to be a blessing in disguise.  I have always said that anything is possible.