BOYS FRIGHTINING EXPERIENCE WITH A FLYING SAUCER OVER NEW JERSEY

I remember when I was about 7 years old my mother father brother and I went to a Christmas party everybody was having a good time band playing people dancing and some guy don’t know who he was, called my father outside.  My brother and I followed him and the guy was pointing up saying look at that  I asked my father what is it and he said a flying saucer.  That’s when I lost it.  I started crying saying were going to die then I started to run toward home and my mother caught up with me and she said its ok, its not doing anything, its just sitting there.  Let me add I am still hysterical crying and trying to break free from my mother because she is walking closer to it to where we started from outside the hall. I guess I was trying to get further away from it.  So we get back to where we started and their are more people outside looking  at this thing.  It was very large saucer shaped with lights going clockwise and my father said that one of the lights were out.  You could not here nothing coming from it and made no noise what so ever.  It was just hovering there above  a police station and after about five minutes, it started to move slow so my father had the good idea to follow it in the car. At this time I am starting to calm down probably because we are all in the car.  My brother and I were both looking out the back window looking at it still following it.  Then we came to a bridge and we were going west and the UFO was going south and all of the sudden bam, it took off like a bat out a hell and never saw it again.  This is not a hoax please feel free to call me to talk more looking forward to it.  I can tell you guys the path we drove till we last saw it.   I don’t know how to forward sketches or maps with computers sorry.  Please call me and let me know if you guys got this report.  I held my breath to long not saying anything  and the people I told pretty much thought I was crazy so it would be nice to talk to someone who cares like mutual ufo network.  NOTE:  The above image is a rendering.

This case is under investigation by State Section Director Ed Dobson of MUFON New Jersey. 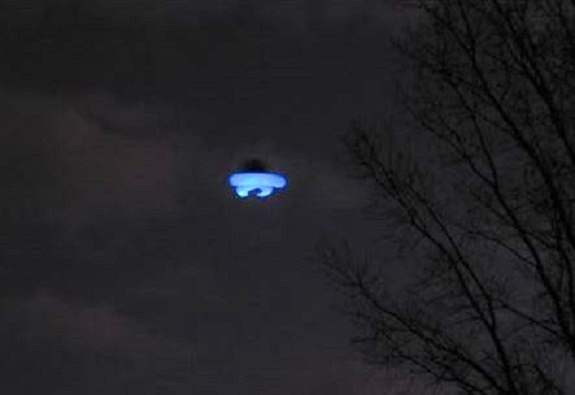 BEST NIGHT TIME PHOTOS OF AN ALIEN CRAFT OVER MASSACHUSETTS

WITNESS STATEMENT:  My kids and I saw this incredible UFO in the eastern sky on Dec 11th at around 5 pm. No sound just moving back forth up and down then exited. One picture is enhanced with false color clearly showing the dome top above the bottom lights. The pictures are from a digital camera and not re-touched at all, other than brightness and contrast and false color. This is the Single best UFO photo ever! Two reasons- Its extremely crisp, and it was taken in the dark of night with a fairly recently manufactured DIGITAL Camera, You see, I am a photographer by trade and the ccd’s of most newer digital cameras have the ability to pick-up nearly-visible and invisible light. Can you guess where that beautiful blue lies in the spectrum??, 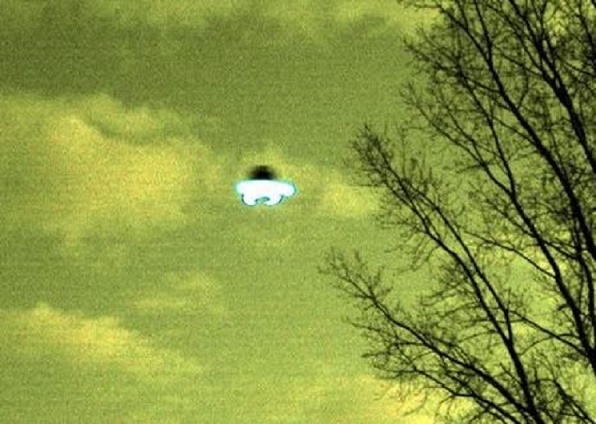 Yup that’s right- UV If you take the image and adjust the brightness and contrast, you will not see a dome over a structure, you will see a perfect sphere with three glowing energy tracers (for lack of a better word) These energy tracers are proof positive that whatever this thing is, its generating ultraviolet radiation and if you look closely, the “tracers” seem to be rotating counter-clockwise and slightly over-lapping. I’m totally floored by this, please put this out to your readership and let them run with the ball, thanks.   The witness seems to think it is a domed disk, probably because for most people that’s what UFOs are supposed to look like. But the magnifications of his photos tell an interesting story.  The 2 photographs show an oval/egg-shaped UFO (which is one of the common configurations seen near the ground) flying with the long axis vertical, with a noticeable luminous air-ionization around the underside.

This illuminated and illuminating sheath of atmosphere around the UFO is a sheath of ionized and excited air molecules { also called a “plasma” in science.}

SPECIAL THANKS TO WWW.RENSE.COM