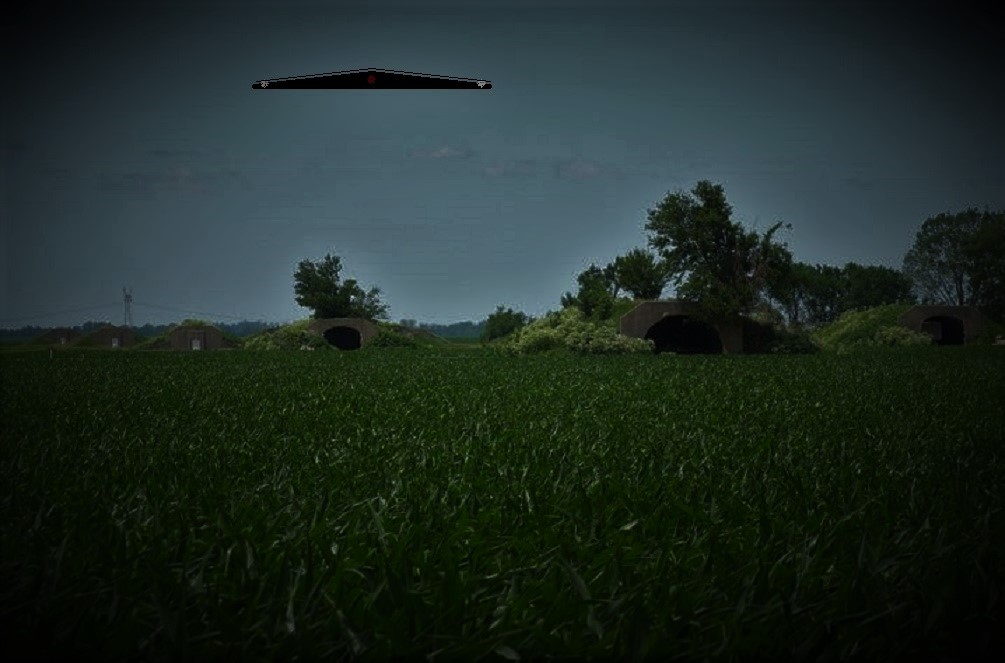 The date of my first Wilmington UFO encounter is hard to pinpoint exactly due to my shock, but the few people I had told right away brushed me off, so I just let it go and locked it in my mind. I do know that it ranged between December 10-Dec. 15 2017. Time of sighting I do recall, it was about 9:30pm and I froze locked on this object until it was gone without a trace. The UFO was here for a solid 7-10 minutes actually, so there was no denying what I believe to have seen first hand. Sadly I was home by myself so I had nobody to force outside to see for themselves.

Now this one is interesting because like I mentioned in my reply email I am surrounded by heavy wooded area. Lighting in my town is extremely sparse so the sky on clear nights is incredible, and usually carries an extremely eerie vibe to it because to the east and west of my home lie 2 massive power plants, and a semi-secret helipad and private (I think its private at least) airport are hidden within a few openings in the wooded area unseen from the main road, known only based off of seeing them ascend from strange areas seeming to be right smack in the middle of the trees.

Before I move on to the UFO details I wanted to make you aware of what I believe may be an important detail about this secretive helipad. My husband worked nights and didn’t come home until 11:00 pm usually so I felt sort of helpless and even began wondering if I was being irrational of my fear and discomfort I would endure every single night from April through the end of September 2017. Each night around 9:30-10:00 pm (varied by the day) I would hear a helicopter flying too low for comfort above my neighborhood in particular. It would fly this low in what sounded to be circles until about 11:00 pm and then seriously come back out at around 1:00 am and stay out low flying circling around until 2:30-3:00 am! No exaggeration here. I finally chose to go out and see this copter and sure enough it is all black and appears to be some type of military copter. I have seen it flying low in fields during the day in my previous town in the exact area of my very 1st UFO sighting in Channahon, IL 6 years ago; so I found that very strange. Spotlight was on and always seemed to be searching intently for something, and of course that’s unnerving. I think it’s connected to the encounters around here to an extent.

So back to the actual UFO. I happened to be looking in the general area of the arsenal location (US Army Ammunition Plant in Wilmington, IL) and in the distance a little further away you can see the orange light from the plant. I was just scanning as usual and suddenly I saw a VERY large triangular craft that was seemingly out of nowhere just hovering over the area. I know for sure it was far enough to be near this arsenal if not directly over it, but I couldn’t physically see what it was for sure hovering over. I saw a total of 3 lights on it, one light on each corner of the triangle. The lights looked to transition from red, blue and green smoothly. I believe I saw a white beam of light underneath the craft from my position on my steps and it wasn’t your text book abduction beam where its light is moving down to the ground, but I do know I caught a glimpse of white light in that area and it was bright enough to give me a feeling like it was scanning the premises for something or maybe even just taking a look around at my strange town? Either way it sat there in silence (I feel like I was 1-2 Miles away at the most as a reminder so I couldn’t see as much as I would’ve liked to, but I think I should’ve heard noise for how large it was!) it then started moving very slowly westbound for about 2 minutes maybe three, it hovered for 4 or 5 easily. It crept and then just flew out of the area in a split second like it just teleported to another dimension. I was on Cloud 9, and didn’t really feel any fear or anything this time. I was a little anxious but more frozen with excitement and shock. I attempted numerous pictures zoom on, off, filters for more light and I could NOT capture this craft with my phone cam at all, not even a glimpse which I found very creepy.  NOTE: The above image is CGI.