Hi Ken : I had gone back to Daddyhole Plain to further investigate the area, and see if I could capture anymore strange phenomena. It was a hot sunny day, but unfortunately there was a slight mist around the coastline which meant it would be a lot harder to capture anything out of the ordinary, but nevertheless I was determined to give it a shot. I was looking towards Thatcher Rock and Ore Stone, when all of a sudden a load of black spheres shot up from out of the watery depths and flew around above the small islands before they flew back down into the sea. I had successfully managed to capture these spheres with my Nikon P900 camera within a burst of photographs that clearly showed the erratic movement of these rather unusual sphere shaped objects. I was very intrigued by them, and I zoomed in further upon Thatcher Rock and Ore Stone to try to capture a closer look at them, and to my surprise two more black spheres emerged from the water and flew away.

I immediately took up a different vantage point looking out towards the water in order to see where they had gone, and I was really quite surprised by what I saw. There were six spheres in total, two of which were in the water, while the other four were seemingly just hanging silently in the air in a fixed formation. It was a very peculiar sight. I quickly took some photographs and with that they all flew off in all different directions away from view. I was completely stunned by this. These objects had no visible signs of any propulsion, and were completely silent. I have been witnessing these black spheres at this location for many years now, and they have many strange observable traits which are definitely unlike anything conventional. Whatever this phenomena is, it clearly has a strong presence within this area of Torquay and is definitely worthy of further scrutiny and continued scientific study in order to understand what exactly it could be, and why it is so prevalent within this particular area. The photographs were taken ‎on the 23rd of ‎March ‎2022, at Daddyhole Plain, Torquay Devon England. All the best John.

Hi Ken : I was at a high vantage point looking down upon the Teign estuary, taking photographs of the surrounding area with my Nikon P900 camera, when I just happened to focus in on a group of fields that were on the opposite side of the estuary. I started to take some photographs and while in the process of doing so, two objects passed by at great speed. I thought to myself “What on earth was that?” I then looked at the camera’s LCD screen only to be shocked by what I saw. I had managed to capture a cigar shaped object along with a large cuboid shaped object. The cuboid object was very large and it was directly above the smaller cigar shaped object. Both of these objects looked to be metallic in nature, and I was completely gobsmacked by this capture. The objects had been moving at such a terrific rate of speed, so it was just fortunate that I was able to capture them at that precise moment as they passed by. I looked about the area for a while but the objects had long gone. I bet they were heading straight toward the ocean, where these objects always like to hide. I have had so many sightings at the Teign Estuary just lately, so it does not really come as a great surprise that I have managed to capture more of these unidentified objects high above the estuary. The photograph was taken at  5:40 PM on the ‎8th of ‎August ‎2021, at the Teign Estuary, Devon England. All the best John.

Hi Ken : I was at the Teign Estuary and the tide was out, so I decided to walk along under Shaldon bridge to the middle of the Estuary. Once I was there, I started to take random photographs of the area when all of a sudden I spotted a massive triangular shaped craft that was hovering low over a field in the distance. I quickly took a photograph with my Nikon P900 camera, and before I had the chance to zoom in, the triangular shaped craft just vanished in to thin air. It was quite obvious to me that it was still there, but it had in fact cloaked so that it was no longer visible to prying eyes like mine. I then heard a helicopter over head, so I looked up only to see that it was black and unmarked. The helicopter flew across the sky heading towards the area where the huge triangular craft had been. I took several photographs of the helicopter and while in the process of doing, so I was utterly astonished to see a small sphere shaped object flying around the helicopter that appeared to be checking it out. The sphere object then flew off, so I continued to watch as the helicopter circled the exact area where I had previously seen the huge triangular shaped craft. The helicopter then flew off heading away from the location at speed. I was completely gobsmacked. There definitely appears to be a lot of strange U.A.P. activity around this area and it would appear that someone is closely monitoring the situation. Who exactly was it in that black unmarked helicopter anyway? It definitely was not a coincidence that it showed up when it did. The photographs were taken on the 24th of July 2021, at the Teign Estuary Devon England. Have a great week my friend All the best John. 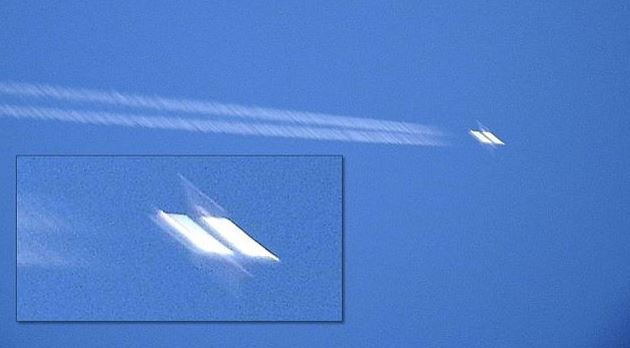