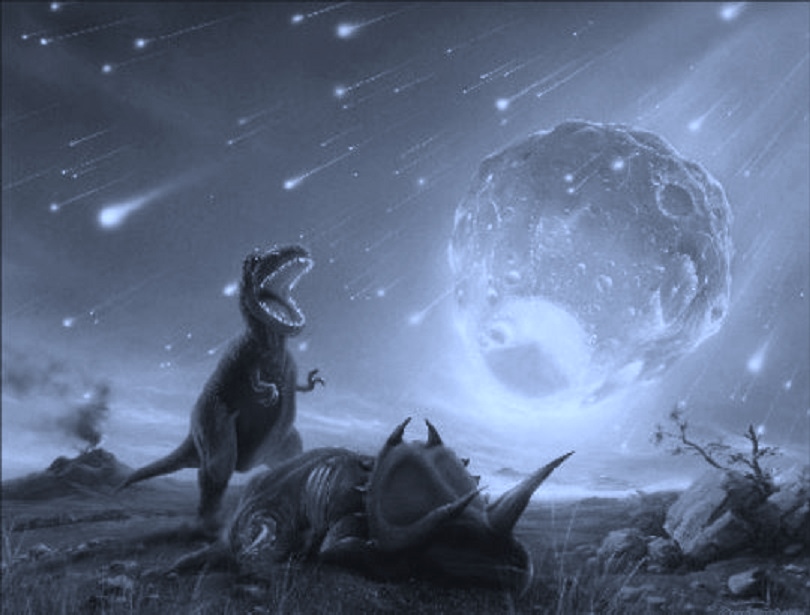 Above is a depiction of meteor crashing into the Gulf of Mexico in the late Cretaceous Period.

Extraterrestrial evolution is a topic of great interest to me in a number of ways. The thought of this may be bizarre to many people, but perhaps it shouldn’t be. There are four factors that come immediately to mind.

This blog post will deal mostly with this fourth factor, that is, the open question. It has been both rumored and openly stated that NASA and JPL have quashed reports and evidence of life on Mars and other spheres. Most prominently I think of assertions made by Dr. John Brandenburg, formerly of NASA, about advanced life on Mars; and of evidence of certain findings of primitive organisms (crinoids) visually identical to Earth organisms discovered by Dr. Richard Hoover, 46 year veteran NASA astrobiologist and “Inventor of the Year”. In fact, I wrote a blog post about that a few years ago that can be accessed HERE. This is particularly important to  the rest of my thinking on this subject of extraterrestrial evolution.

If the organism found by JPL on Mars is, in actuality, largely identical to those found on Earth, it seems to point to the idea that extraterrestrial life might always or often evolve in the same or similar manner. One frequently discussed concept that follows in this direction is the controversial idea that some extraterrestrials who have purportedly visited the Earth are Reptilians. The theory goes something like this: if the dinosaurs who once inhabited the Earth were not killed off by a comet or large meteor which struck the Gulf of Mexico at end of the Cretaceous Period, would they have perhaps evolved into self conscious bipedal beings who might roam the galaxy? And if so, is it not possible or indeed likely that on other suitable planets in the galaxy or beyond such Reptilians might exist, if in fact, evolution follows a similar model everywhere? In this discussion somewhere, one must consider non-human very intelligent life forms right here on Earth that have not developed with bi-lateral symmetry. I am thinking here of cephalopods like squid. That might derail the similar evolution everywhere theory as the sole way life could evolve.

On the other hand, is it possible or likely that evolution throughout the cosmos looks nothing like Earthly evolution? I’d say certainly that is possible and in certain circumstances probable. One probable circumstance resulting in a different evolutionary pattern might be an environment where the building blocks of life are not carbon based or not dependent on water or oxygen. Dear Reader, does your definition of “life” depend on breathing or respiration? Furthermore, should it? Perhaps consciousness is a better definition of life than taking breath.  But are these ideas of evolution in the cosmos mutually exclusive? I don’t think so. Ponder this: perhaps life develops in a similar evolutionary pattern where carbon and water are available, and totally differently where they are not. I am not stating conclusively that this is the case, but it certainly provides food, no a feast, for thought.

Fahrusha is a professional intuitive and co-host of “Shattered Reality Podcast”.