2-15-17 FLIGHT FROM WARSAW TO LONDON HEATHROW

Flying from Warsaw to London Heathrow, looking out the window to my left. Out of the corner of my eyes I saw these dark, thin figures in the middle of a cloud. It definitely wasn’t a building because we were too high up so I thought they were mini tornadoes There were 4 figures: 2 tall ones and 2 slightly small ones. They were very close together and they weren’t moving at all. They were dark, had a thicker upper body and a thinner lower body. One of them looks like they had wings. 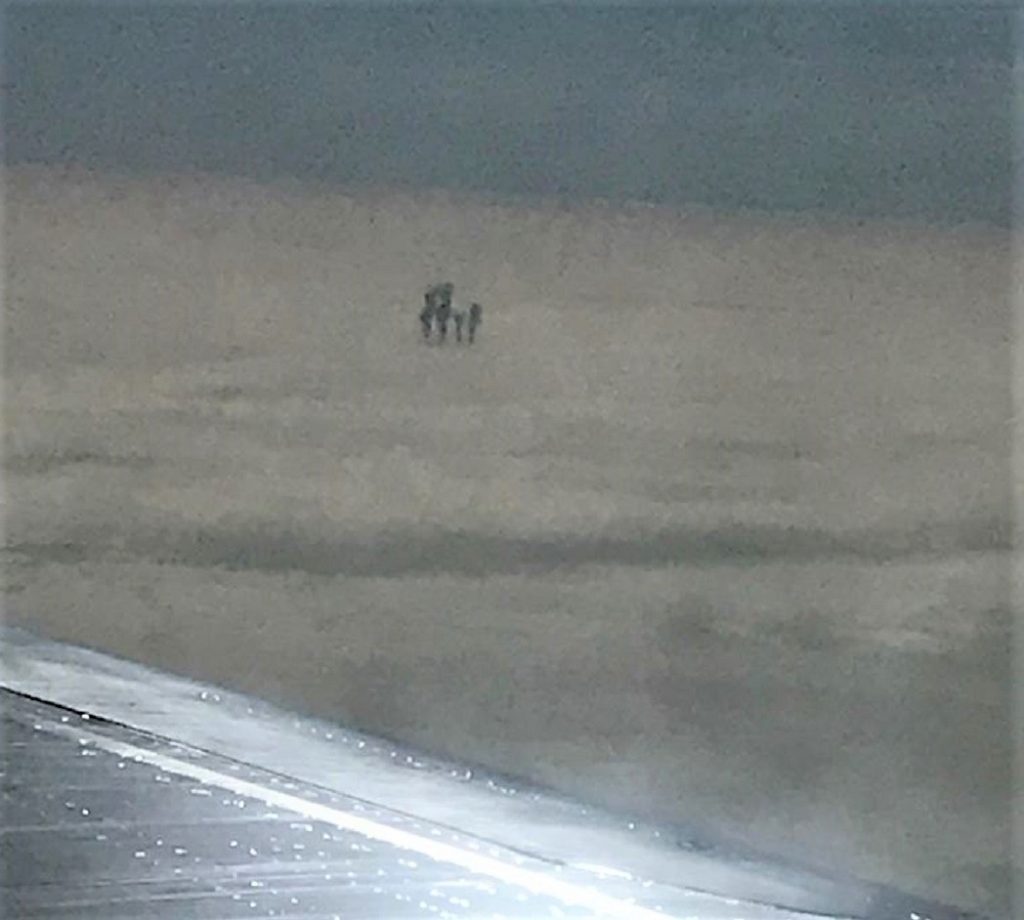 I was in awe and shocked at how it was all deserted then there were these random weird objects just standing on top of a cloud. I took photos and showed my parents and brother the photo and they couldn’t believe their eyes. I was also a little bit excited because I have never seen anything like this before. Flew past the object(s) then it disappeared.

A Nevada witness near Austin reported a close encounter with a low flying and hovering triangle-shaped object about 300 feet long moving overhead under 500 feet, according to testimony in Case 82126 from the Mutual UFO Network (MUFON)  witness  reporting  database.   The  reporting  UFO witness  is  a communications engineer who was leaving work at a remote radio site on Mount Callahan on February 15, 2017.  “We were driving down from Mount Callahan at 8 p.m.” the witness stated. “We entered a clearing and saw a bright light in the sky just out in front of us about 1,000 yards. It was just sitting there about 30 degrees up in the air.”  The witness stopped his truck and got out to watch the object.  “In an instant, it became a very large triangle with two lights in each corner. The object appeared to rotate slowly for about a minute. The body blotted out the stars. Then it suddenly became a massive rectangle with about 30 lights around the parameter. It did not move or make any sound for about a minute.”  The object then suddenly disappeared.  “Then it just was gone as if turning off a light. About five seconds later we could hear a very loud rushing air sound just above us, but we could not see anything above us, just stars. The sound got louder, then slowly as if flying away, got softer and softer until silence. This lasted about 20 seconds. This was an extremely remote commutations site, Our trucks were the only lights for 20 square miles. I felt that it had been watching us and then just appeared directly in front of us, did its little show and left.”  Nevada MUFON Assistant State Director Sandra Countissclosed this case as an Unknown.  “Two other black triangle cases were reported in the last month in Nevada,” Countiss stated in her report.“First one is Case # 80764 in Carson City. Second is Case #82130 in North Las Vegas near the Air Force base flight zones. There is another from November 2016, Case # 80486 near Laughlin.”  No photos or videos were included with the MUFON report, which was filed on February 16, 2017.

On Thursday, February 19, 2015 I was driving from Kennewick, WA to Vancouver, WA on the Oregon Interstate 84 West that runs along the Columbia River. At 11:55 a.m., I was approximately 1/4 mile from the green Gilliam Co. road sign. The weather was clear with some sun and high white and dark rolling clouds.  A train came up alongside of me on the raised tracks to the north of the Interstate. On the north side of the train track, setting lower, is the Columbia River bed and river. I looked over at the train as it passed me, wondering how fast it was traveling as I was driving approximately 68-69 m.p.h.  I glanced back at the train to the left and caught something out of the corner of my eye to the right that made a downward fishhook motion from above the river water, as if it had descended and leveled. I looked directly out my passenger window and parallel with me was a small domed craft, what appeared to be hovering, but it also stayed parallel with me as I continued to drive.  It was approximately 10-15 feet above the Columbia River water, well below the Interstate and train track. There were no boats in the water and this was an obvious aircraft with an obvious shape, above the water.

I glanced back again at the last train car that was now ahead of me on the track and back to the craft for size comparison, and the craft appeared to be slightly larger than half a train car.  The craft shape was slightly domed on top and was symmetrical. It appeared to be directly facing me as it stayed parallel with me. On the end of the dome, on the left and right, were small extensions that looked like downward wing tips.  The underbelly was slightly domed, but not as much as the top part. In the center of the side wall facing me, was a smooth small protruding cone, or rounded tip of some kind, with a perfect black circle on the end. Above this cone, was a shape that resembled a bell dome, or what came to mind at the time was the shape of a WWII German soldier hard hat, with a slight curl on the end and small brim at the top.  The center of the bell looked flat, which looked like a cockpit window of sorts, but there was no glass reflection or difference in color from the rest of the craft. The overall color was a dry flat blended, almost swirled, grayish green, very similar in color to that of the river, but the river was shiny and glossy, and this was an obvious; flat color, and again, obviously shaped and raised above the water.  This entire event was only a matter of seconds, approximately 12, but felt slow motion at the same time as I couldn’t believe what I was seeing.

The craft, while appearing to stay even with me while I continued to drive, and the train out of immediate view now, made a 1/4 slow even circular turn to the right and paused for a second. As it did this, I did not see the profile of the cone or brim that was on the front. It appeared a smooth, almost fluid, transition. There were no shapes or markings on this side, only the same grayish green color.  The craft then very quickly made a 3/4 right turn, bringing it full circle, and it shot upward, heading northwest toward the Washington side of the Columbia River, in a steep, just slightly angled, climb, well above the mountain on the Washington side of the river. As it made its final turn before heading upward, I heard a loud brief swoosh sound.  The craft appeared to turn black once it moved away from the water. In a matter of 2-3 seconds, it disappeared in to the white rolling clouds above. There were no visible lights on the craft, no jet trail, no heat or fume waves visible. Nothing.  I drove to the next small town of Arlington, OR, and pulled in to their park. My heart was racing and I felt nauseous. I think I was in shock from what I had just seen.  NOTE: The above image is a rendering.