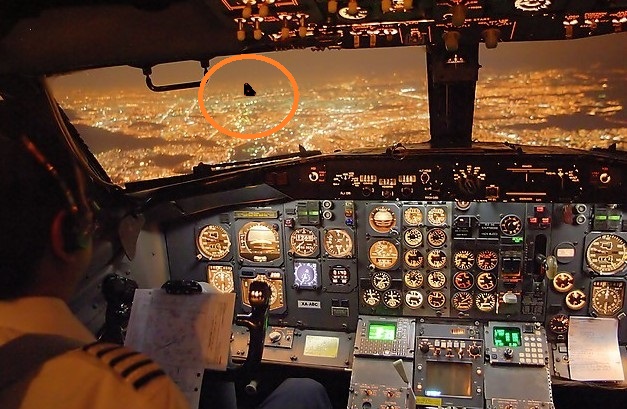 A pilot from a well-known airline saw a strange “object” as he was about to land in Rio Grande, this object was in an area “forbidden” or restricted to air traffic at such a time, and the pilot asked the tower if they could pick up any “air traffic.” The tower replied that no abnormalities were detected and then asked the pilot if the object in question was in the airliner’s flight path. The pilot said no, that it was over to one side, and was then given permission to land by the tower, which requested a report, which was recorded.  This event became known through the Facebook page of renowned tour operator José Heredia, who reported the occurrence, given that his position allows him to have access to communications between airline pilots and the control tower.  The news was published by Infofuegina (web site) but lacking any certainty or particulars on the case, he decided to set the note aside until more information could be gleaned. But while the entry was still active, it caught the attention of the Reportes Ovni Argentina NGO, two of whose members contacted journalist Ramon Taborda Strusiat, who had only heard vague reports from listeners to a radio station that broadcasted the event. The source, however, was unknown until it was finally discovered, and it was the Facebook page itself.  Jose Heredia wondered: A UFO in the skies of Rio Grande? He said that while working at home, “getting ready to go to the banking district” and “listening to the Control Tower frequency of the Rio Grande Airport as always, following the path of air operations in the city, he suddenly heard a private aircraft pilot’s report to the air traffic controller on duty regarding alleged ‘traffic’ in his air corridor (the airplane’s path) which had not been reported.”  Heredia added: “The reply was not long in coming. There should not be any traffic whatsoever in that corridor at the time. In other words: an unidentified flying object report in the vicinity of our city.”  “In fact, ANAC personnel asked the pilot to leave a written record at the Flight Plan Office upon his arrival. Verbatim, from half an hour ago…approximately,” Heredia wrote at 11:48 hours on 17 February 2016, which suggests that the event occurred at 11:20 that morning.  Meanwhile, according to the Jesus Leguizamo of the Reportes Ovni Argentina NGO, one of the group’s members managed to contact the pilot in Buenos Aires, but he refused to go public with the story.  NOTE: The above image is CGI.

CLOSE ENCOUNTER AT A MILITARY BASE IN THE NETHERLANDS
.
FEBURARY 17, 1991  ………… SOESTERBERG NETHERLANDS
.
The night off 17 February 1991 I was walking the night shift watch on the military base off Soesterberg in the Netherlands. Along with a other cadet I came at the central parking lot at 03.00 hour and notes a big circle in the sky strait on top off us. It had no shape but only bight lights slowly rotating anti-clockwise and the light points its self didn’t rotate, the colours did ant in a liquid manor. I estimate the object abbot 30/50 meters in diameter. The first thing we both thought was a blimp, a zeppelin, the one like GoodYear has with the light screens on the sides. But the fact that it was very low and absolutely stationary and silent made its very, very odd. After some minutes the lights started to rotate faster and suddenly it took off at really incredible speed to the west. A couple off seconds later we felt a short hard wind blowing staid on top of us like a downwash from a helicopter. If there was a way to describe the speed this thing was going then I give it but I can’t. We had a clear view for over 30 km that’s +- 20 miles ? this thing cover that distance from stationary in some ting like 0.10 sec.  I know aviation and have flying experience and I am very technical. This kind off extreme acceleration turns humans in to liquid. For many year this has been a unspoken chapter in my live, I didn’t wanted to speak about the incident because instantly after the encounter, me and the other cadet became unexplainable very, very ill, and for days suffered a hi fever and extreme vomiting. The illness was so bad that it left me traumatised and not able to speak about it for years.   NOTE: The above image is CGI.
.
KEN PFEIFER WORLD UFO PHOTOS AND NEWS
WWW.WORLDUFOPHOTOSANDNEWS.ORG
WWW.WORLDUFOPHOTOS.ORG
THANKS TO WWW.MUFON.COM CASE FILES
.
.

WEIRD UFO SIGHTING NEAR THE SUSQUEHANNA RIVER IN P.A.

I was driving my tractor trailer north on US15, approximately 4-5 miles south of the intersection of PA44. Straight above the Susquehanna River, to my northeast, also, in the direction of Watsontown, PA, I saw two bright white lights. They were probably about 1.5-2 miles away when I first saw them. Maybe even slightly farther. I thought it was an aircraft that had taken off from Montoursville regional airport, heading south. But as I drove further, I realized the lights were not moving. I would describe them as very bright white, large-looking headlights. They appeared to be pointing towards the river, as a beam projected from them straight down. I would guess the beam only projected about 25-40 from the craft, which was around 600-800 feet above the river. The entire duration of seeing it was probably about 3-4 minutes or so. I slowed my speed from 55-60 to low 40s once I realized the object was not moving. The truck seemed to drive itself as I got “lost” watching this. This may sound odd, but I had an overwhelming feeling that “nothing was going on”. That’s the best way I can describe how I felt.  There was nowhere for me to pull my truck over until a mile or so down the road, where I know of a small diesel station where I have been before. In hindsight, I regret not pulling into the shoulder to film it. I was able to capture a 20 second iPhone5 video of it. The video is shaky because I was still driving, and using elbows to steer. The object appears to be moving because the phone is bouncing everywhere. The object was definitely not moving though. When I pulled into the diesel station, trees and a ridge blocked any view I could have had.  NOTE: The above image is a rendering. 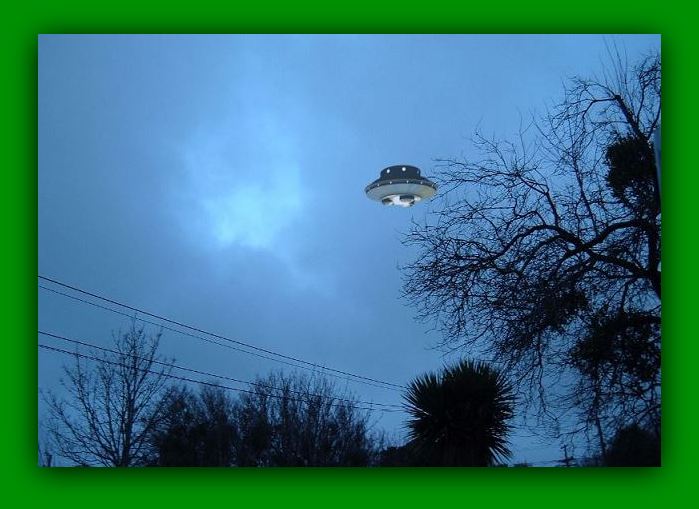 Twinsburg — A popular TV show once opined that “the truth is out there.” The evidence may have been in the evening sky over the city Feb. 17, 1969.  The curious case of one local UFO sighting began innocuously enough in the city of 7,000 with TV interference at a Glenwood Drive home. It concluded, abruptly, with a bizarre visit to the Twinsburg Police Department from a United States Air Force lieutenant colonel and his mysterious, diminutive sidekick.  According to a recently released report from Project Blue Book, the United States Air Force’s systematic analysis of UFO reports between 1952 and 1969, a woman, 44, and her son, 19, were watching the news when the color contrast went out on their TV — and then the entire signal.  The mother walked outside at dusk to check the antennae, and immediately called Twinsburg police to report an “oval-shaped object that had red and white lights around it” — what World War II pilots might have dubbed a “foo fighter,” or UFO, just two decades earlier.  “Looking up we saw the strange object, coming over Glenwood Drive,” said the woman, whose identity is redacted in the March 6, 1969, report.  “I never seen anything like this before,” she states. “It seemed to have stopped near the corner of [Glenwood Drive], then proceeded down [East Idlewood Drive] for about a quarter mile … then it just went right up out of sight.”

Sgt. Donald Prange, a former Twinsburg officer and Marine Corps veteran who later served as chief of police in Twinsburg in the late 1970s, responded to the woman’s call around 6:40 p.m. More than 20 calls referencing the UFO were ultimately fielded by Twinsburg dispatch that evening.  Prange, now 77, recalled the event with detail Jan. 27 from his home in Rancho Cordova, Calif.  “We officers talked amongst ourselves after the sighting,” said Prange, who said he witnessed the object over R.B. Chamberlin High School for several minutes with Twinsburg patrolmen Walter Orcutt and Herbert Munn. “I told them I didn’t think we should say anything to anyone … they would think we were crazy.”  In keeping with caution, the TPD did not immediately report the event to the USAF. The USAF was made aware of the event thanks to a Feb. 18, 1969, letter from the woman’s 19-year-old son to Wright-Patterson Air Force Base in Dayton detailing the sighting.  In its April 22, 1969, conclusion to the Glenwood Drive woman, the USAF determined that the object was actually an “aerial advertizing [sic] aircraft.”  “A letter was sent to the Twinsburg Police Department requesting information on the sighting, however this office did not receive a reply … the description of the UFO is similar to past reports of Aerial Advertizing aircraft,” states Lt. Col. Hector Quintanilla, chief of the now defunct Aerial Phenomena Branch at Wright-Patterson.  Prange said he doesn’t buy the USAF’s answer in the Twinsburg incident any more than he believes its conclusion from a Portage County case three years earlier, in 1966, when officers were informed that they had just chased the planet Venus for 85 miles, from Ravenna to just outside of Pittsburgh.  “It was like nothing I’ve ever seen,” Prange said. “We had three cars respond, and watched it for several minutes over R.B. Chamberlin High School, near some power lines there.

“It appeared to be stationary, hovering. What bothered me is that it didn’t seem to be making any noise, at least not that ‘egg beater’ sound you get from a helicopter. It was more like a whirring sound. Then it slowly rose up and disappeared.”  For the woman and her son, the story ends with the April 1969 correspondence from Quintanilla.  For Prange and his fellow officers, the story of the peculiar foo fighter over Twinsburg has one final, bizarre chapter.  About a month after the sighting, Prange says his department was visited by a USAF lieutenant colonel — believed to be Quintanilla — and a “strange little man.”  “They brought out a light colonel … another strange little man was with him … to question us individually,” Prange said. “The smaller man, perhaps 5 feet tall, was not like us … he had strange features, almost like a child who has aged rapidly.  “He wore a hat, gloves, and he never spoke to us, never shook our hands, just observed. I don’t remember [the colonel] ever even saying thank you. When they left, we never heard from the Air Force again.”  Prange added he never experienced anything like the February 1969 call again in his law enforcement career.  NOTE: The above image is a rendering.