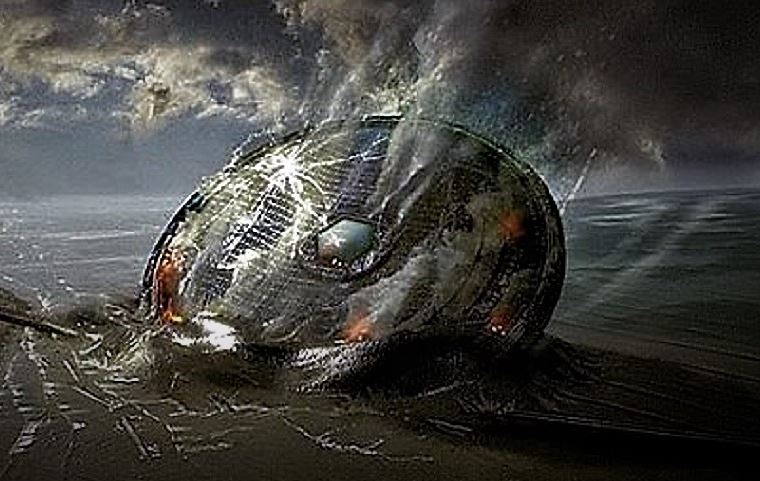 My mother and her family were working in Naples, Florida in the late 1950’s. One day-worker saw something crash nearby. A plane? All the workers ran to the site to search for survivors. The aircraft was sticking out of the sea near the beach. When the rescue got there, they realize it wasn’t a plane, but some type of spacecraft.

The “ship” had no doors or windows that could be seen. Beside the ship was one of the pilots. The pilot was still in it’s bizarre space suit. It was tall and very skinny. But had a very large helmet. The helmet didn’t have a shield but a robotic looking face plate. Two of the workers picked it up and said it had little weight. It appeared to be dead. Others found a second suit. The suit was empty. It was laying in the nearby grass. Still others tried to get into the ship to look for anymore survivors.

Then suddenly, an Army helicopter appeared. The Army came in great numbers to secure the location. Troops surrounded the workers’ camp and force them to stay. They were there for two days afterward. The military told the workers that no one would believe them if they told what transpired. “Who would believe hobos, drunks, and uneducated Mexicans?” The foreman told the workers to do what the military said and no one would get hurt.

While trapped there, my mother observed the whole situation. On one of the two days trapped there, she met an unusual person. While sitting waiting for the occupation to be over, a person wearing a large blanket approached her from behind. In a bizarre mechanical voice, the strange individual asked her ”Are they looking for me?” She turned to see a mechanical face under the blanket. There appeared to be lips moving but there was a delay of sound coming from them. She realize it was not human and told it “Yes!” She told it to keep away from the military and look for a chance to escape.

There is a happy ending to this story. When the Army was still there cleaning up, the hobos found the surviving crew member. They put a hooded coat on it and other clothes to totally cover it up. They poured booze over it to make it smell like a drunk and helped it since it had trouble walking. When the bus came to pick up a batch of workers, the workers carried it onto the bus. It suddenly spoke with it’s mechanical voice, “Are they still looking for me?” They told it to shut up and get on the bus. The family left the next day. Those who took the alien were never seen again.  NOTE: The above image is CGI.